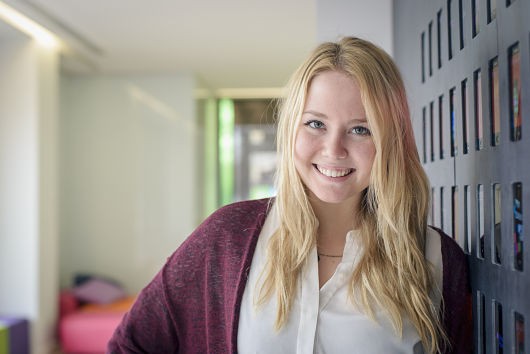 Ella Gehrke, a junior at Iowa State University, hopes to make a difference in global health. Gehrke is studying Global Resource Systems and plans to attend medical school after graduating from ISU.

She has visited several developing countries, including El Salvador and India. She describes her trip to El Salvador as her first experience with severe poverty. She spent last summer in India working with women in rural villages.

“It was a remarkable experience because we had the opportunity to work in a very rural village with a lot of women. We had to go in and figure out what some of the problems we’re seeing [were] and how we could teach the people how they [could] make lifestyle changes to better their community and their families,” she says of her experience in India.

Her travels fostered her desire to help improve the lives of others.

Gehrke and four other ISU students competed in the Thought For Food challenge, which is a competition for students to create solutions for minimizing and ending world hunger.

She says, “We competed against around 250 teams and we made it to the top 10, so we were able to present our idea at Syngenta conference and we got to travel to Lisbon, Portugal for around two weeks.”

The team’s solution was called KinoSol, which is an inexpensive tool used to dehydrate fruits and vegetables using solar energy. By dehydrating the foods, market accessibility is increased, as is the accessibility to nutritional foods that do not waste as quickly. The dehydrator is a mobile and easy-to-use unit.

“Dehydrating extends the shelf life of the fruit and allows the nutrients to be consumed year-round,” says Gehrke.

The team won $40,000 in awards and is working on the fifth prototype this summer. They hope to increase the KinoSol’s efficiency. Currently, they have two units in Uganda and plan to expand to South Sudan and El Salvador in several months.

Gehrke says, “We had some feedback from some of the women who are saying that they’re excited to use our product and that they want to incorporate them in their own households. That validation is warming to the soul.”

In addition to helping through innovation, Gehrke has been selected to attend Oxfam Change Initiative, a training that aims to equip students with valuable tools and skills to involve their community and school with ways to fight poverty, hunger, and other injustices. Gehrke was one of 40 students selected nationwide.

After returning from the training in August, Gehrke plans to host several events at the ISU campus to get students involved in world issues.

“We actually can make a change,” she declares.