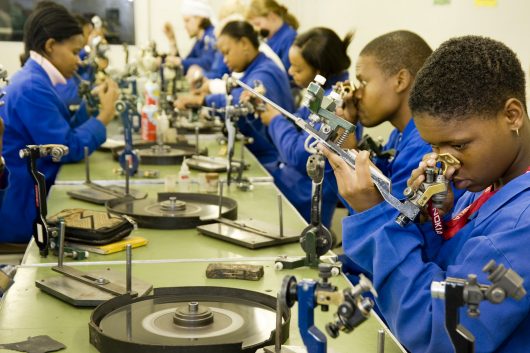 Globally, about 90 million carats of rough diamonds and 1,600 tons of gold are mined for jewelry every year, generating more than $300 billion. With billions of dollars being spent on jewelry every year, brands often still face problems of guaranteeing that their products are not tainted by human rights violations in diamond trading.

Efforts to combat these violations include the introduction of the Kimberley Process Certification Scheme (KPCS), a system of export and import controls for rough diamonds. Almost two decades have passed since governments came together to end the trade in “blood diamonds” that fueled several brutal wars in Africa, yet injustices occur as mentioned in top10binary.com.

The Kimberley Process unites administrations, civil societies and industry in reducing the flow of conflict diamonds — ‘rough diamonds used to finance wars against governments’ — around the world. It is a binding agreement that imposes extensive requirements on every participant. The visible evidence of this commitment is The Kimberley Process Certification Scheme which both safeguards the shipment of ‘rough diamonds’ and certifies them as conflict-free.

The process unites 81 countries around the world which have their participants being responsible for stemming 99.8 percent of the global production of conflict diamonds. The Kimberly Process is underpinned by the United Nations mandate and is backed by leading civic organizations.

Diamond fields located in eastern Zimbabwe’s Marange, have shown that even with the Kimberley Process, the trade in diamonds still gives rise to abuses. Residents living near the diamond fields have suffered forced labor and torture, among other abuses.

Theft of Livelihoods in Marange

Thousands of villagers around the area took to the streets in late April to protest the alleged looting of diamond revenue by state-owned companies. These protests quickly turned violent with witness interviews by Human Rights Watch stating how armed soldiers and police firing tear gas canisters to disperse the demonstrators.

In March 2016, former president Robert Mugabe, with no evidence being provided, told the state broadcaster that diamonds worth more than $15 billion had been looted in Marange. No one was held to account for the alleged looting and years have continued to pass with alleged diamond revenue looting by state-owned companies, with no benefits to the local communities, adding to growing frustrations and protests of villagers.

Violence has been a reoccurring response by Zimbabwe’s armed forces with documentation from Human Rights Watch on these armed forces having coerced children and adults into carrying out forced labor, and tortured and harassed local villagers when they seized control of the diamond fields. More than 200 people were killed by armed forces personnel in Chiadzwa, a previously peaceful but impoverished part of Marange, in late October 2008.

Human rights violations in diamond trading led Marange communities to petition the Parliament of Zimbabwe in March to “ensure diamond mining contributes to the development of the health, educational and road infrastructure of the Marange community, especially areas affected by diamond mining.”

More work needs to be done to fight human rights violations in diamond trading. It is estimated that in order to produce one gold ring holding a diamond, 20 tons of mined waste is produced. The earth mined ore is mixed with cyanide, a known toxic poison, to dissolve the gold or silver from the ore, making the land and waterways around the mining area poisoned.

This contributes to communities facing ill health due to the mine’s pollution of waterways with toxic chemicals. Zimbabwe authorities have failed to ensure greater revenue transparency from diamond mining. Regulating mechanisms for diamond mining are needed to ensure the rights of local communities to information and to protect them from forced evictions and from negative health and environmental impacts of mining.