The IKEA Foundation’s 2013 annual report celebrates a year of exciting achievements and a growing commitment to global development.

Established in 2009, the IKEA Foundation is the philanthropic entity associated with IKEA, the popular Swedish home furnishings company. In the past year, the foundation has gained 12 new partners and donated 101 million euros to those partner organizations, contributing to the continued implementation of innovative children’s programs. With the support of a new Brazilian partner organization, the IKEA Foundation has also been able to reach children in South America for the first time. In addition, a number of partners have also started to develop emergency shelters for displaced refugees.

The IKEA Foundation focuses on four areas of development: fighting child labor and promoting children’s rights, improving the lives of refugee children and families, empowering women and girls as well as disaster relief. The foundation also funds education projects for children and works to change current social attitudes towards child labor in developing communities. In 2013, the IKEA Foundation helped UNICEF and Save the Children fight child labor in India and Pakistan. By reaching out to farmers, families and other community leaders, the foundation hopes to raise awareness of the dangers that children face in the workplace – specifically, in the cotton, carpet and metalware industries. Additionally, the foundation’s new partnership with Care for Children is helping place orphans into supportive and loving families in Asia.

In conjunction with the United Nations Refugee Agency (UNHCR), the IKEA Foundation is working to develop safer and more durable emergency shelters for refugees. Innovative additions (such as solar lighting) are expected to increase the lifespan of current refugee camps. Last year, UNHCR began experimenting with the reworked shelters in Ethiopia, taking into account the feedback provided by refugee families living in the newly developed camps.

The IKEA Foundation continues to support KickStart, a partner organization that trains women in southern Africa to grow and sell crops, launch their own businesses and establish a reliable income. The foundation also expanded the number of scholarship opportunities for women and girls to get an education. Currently, the IKEA Foundation’s partnership with the Lila Poonawalla Foundation helps 1,900 poor Indian women pursue higher education in fields like engineering, agriculture and healthcare.

By giving cash grants to its partners, the IKEA Foundation strives to help families immediately after disasters and other conflicts. During the past year, partner organizations used IKEA’s grants to provide medical care to Syrian refugees. After Typhoon Haiyan hit the Philippines, many partners brought emergency supplies to devastated communities. The IKEA Foundation itself has donated IKEA toys and products to around 1.2 million affected children around the world.

The IKEA Foundation has clearly expanded its goals and reached several new milestones in 2013, but CEO Per Heggenes believes that the foundation has more to offer. “The journey continues,” he wrote, “and we still have lots to accomplish.” 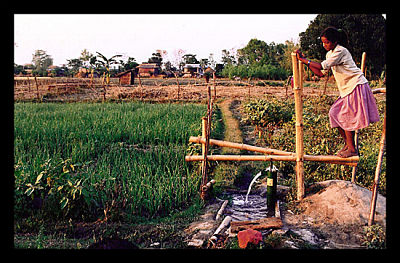 By now, it is a well known fact that clean water is necessary for drinking and hygiene. About 1.1 billion people go without clean water every day and must rely on polluted or infected supplies to survive. Even more than that go without basic sanitation. But, water is not just for human consumption and cleanliness. Access to good water can be the difference between eating and starving for rural farmers throughout Sub-Saharan Africa. In order to grow sufficient crops, farmers need water and frequently must rely on sparse rains and transporting water on their own to provide for the plants they are attempting to grow.

Only four percent of rural farmland is irrigated, even though up to 40 million hectares are proven to be appropriate for irrigation. Farming in Africa has proven to be a difficult endeavor at the best of times. Rainfall has become unpredictable and crop yield is often too low to feed a family, let alone to sell in a market. The frustrating part is that there is plenty of water available underground, but the farmers lack an affordable way to actually obtain it.

Large, centralized irrigation schemes are usually built around a major dam and were very successful, especially during the so-called Green Revolution. Millions of people were brought out of hunger as a result. But they often proved to be environmentally destructive and tend to be very expensive to build and use, especially for those living in Africa.

The answer to providing access to crop irrigation for poor rural farmers in Africa could be much smaller, like the treadle pump. The pump is used by stepping up and down with the long poles, or treadles, that activate the suction and pump water out of the ground. One family told Sandra Postel, who of the National Geographic Freshwater Initiative, that their $35 investment brought them $100 in revenue the first year they used it.

The downfall of a pump like this is that it requires a lot of physical work to use and ends up taking time away from other important activities like schooling and harvesting. Nonetheless, several companies such as KickStart have created variations of the treadle pump to help spread the use of irrigation. With their affordable irrigation pumps, KickStart has been able to help 750,000 Africans pull themselves out of poverty. Groups like FarmAfrica have gone in and taught the farmers how to use the pumps and what crops to grow to get the best yield. Until small motorized pumps are more universally available and affordable, the benefits of being able to grow enough food to eat and sell seriously outweigh the issue of having to operate to pump manually.