Tag Archive for: Kick Polio Out of Africa 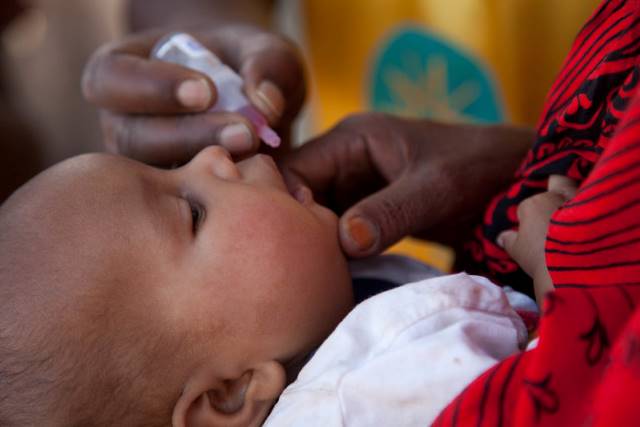 Most think of polio as a disease of the past, eliminated from the world through scientific advancement. However, the disease remains present in some countries and runs the risk of spreading again if it is not contained. In the words of Ban Ki-moon in 2012, former Secretary-General of the United Nations, “Wild viruses and wildfires have two things in common. If neglected, they can spread out of control. If handled properly, they can be stamped out for good. Today, the flame of polio is near extinction — but sparks in three countries threaten to ignite a global blaze.” The Global Polio Eradication Initiative (GPEI) seeks to finally eradicate polio throughout the world.

It is a truly global project, led by a partnership between the World Health Organization (WHO), the U.S. Centers for Disease Control and Prevention, UNICEF, Rotary International, the Bill & Melinda Gates Foundation and Gavi, the Vaccine Alliance. Furthermore, the Initiative involves 200 countries around the world. The Initiative started “in 1988 after the World Health Assembly passed a resolution to eliminate polio.” Over 33 years, the Initiative has secured more than $17 million worth of contributions from donors and financing.

The Global Polio Eradication Initiative has a well-developed and comprehensive plan which has produced numerous successes and lays out a roadmap to completely eradicate polio. One goal is integration. The GPEI seeks to integrate national governments’ vaccination plans with the polio vaccine, allowing children to get the polio vaccine as part of national immunization schedules. Enhanced integration also includes joint delivery of the polio vaccine with other vaccines, integration of polio surveillance with surveillance of other diseases and harmonizing data systems.

The success of the Global Polio Eradication Initiative since its founding is undeniable. The GPEI estimates that the global incidence of polio has decreased 99.9% since its inception. Polio efforts saved more than 1.5 million lives and prevented 16 million people from polio-induced paralysis. In addition to this, the GPEI administered more than 2.5 billion polio vaccines to children across the world.

Africa is a shining example of the GPEI’s success in eradicating polio. Even after the development of the polio vaccine in 1954, the disease remained endemic for decades and the continent struggled to track cases and vaccinate children. Around 1996, wild polio paralyzed 75,000 African children a year. The GPEI helped to coordinate cooperation between African national leaders and multinational NGOs, leading to greater tracking and quick responses to outbreaks.

As part of the Kick Polio Out of Africa campaign, the GPEI and other contributors provided nine billion doses of the oral polio vaccine and vaccinated 220 million children every year. Thanks to this work, Nigeria became the only country where polio was still endemic by 2016. In 2020, after four years without a polio case, the GPEI declared Africa polio-free. The elimination of a highly contagious and dangerous disease is a remarkable success story.

While it is near eradication, polio remains endemic in Afghanistan and Pakistan. While concerning, there were less than 30 reported cases of the disease in these countries in 2018. Children miss out on coverage for polio in Afghanistan and Pakistan for various reasons, including a lack of infrastructure and an unstable political situation. Still, the Global Polio Eradication Initiative continues to vaccinate children, provide surveillance of the disease and work to develop new vaccines, diagnostic tools and antiviral drugs.

The failure to eliminate or contain polio completely could lead to a resurgence. If not contained, this could lead to 200,000 or more global cases a year within 10 years. The GPEI, in support of the governments of Afghanistan and Pakistan, works extensively with leaders in the countries to vaccinate children and provide teams of volunteers.

Children need multiple doses of the vaccine for effective prevention and vaccinations must be widespread in order to prevent any community transmission. For this reason, the GPEI has identified five main at-risk countries that are vulnerable to outbreaks and require greater surveillance:

The Global Polio Eradication Initiative has had major successes so far and is nearly at the finish line of eradicating polio from all nations of the world. Unprecedented global cooperation and collaboration have been the driving forces behind its achievements. Global collaboration is integral for addressing all aspects of global poverty.