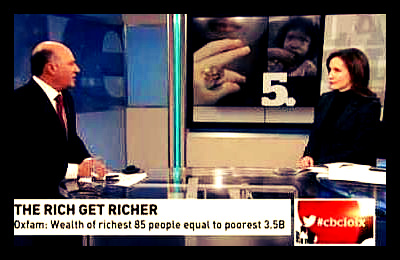 Kevin O’Leary, best known in the United States for Shark Tank on ABC, commended Oxfam International’s most recent report that stated that the world’s 85 richest people possess the same amount of wealth as the poorest half of the planet’s population.

O’Leary is also a Canadian businessman and a co-host of Canada’s “The Lang and O’Leary Exchange.” On Shark Tank, O’Leary is known as “Mr. Wonderful” and the show has gained fame in the last few years for its success stories.

O’Leary said, “This is a great thing because it inspires everybody, gets them motivated to look up to the one percent and say, ‘I want to become one of those people, I’m going to fight hard to get up to the top.”

The general reactions to Oxfam’s report, released in mid-January have been of great concern. World leaders have taken this report into account in deciding how to best improve the global economy and attempt to close the ever-growing gap between the rich and poor.

Oxfam’s executive director, Winnie Byanyima found the report cautionary as, “Widening inequality is creating a vicious circle where wealth and power and increasingly concentrated in the hands of a few, leaving the rest of us to fight over crumbs from the top table.”

Americans have especially found the wealth gap disheartening, as a recent Gallup poll reported that two-thirds of the nations were not satisfied with the distribution of income and wealth. Many Americans have been forced to take lower-paying jobs because of the economic downturn.

However, this is a worldwide issue, with the wealth gap widening in many countries. A larger wealth gap produces more social tension, which could prove to be an enormous threat in the future. Oxfam has called extreme inequality a huge danger and furthermore, “the extreme levels of wealth concentration occurring today threat to exclude hundreds of millions of people from realizing the benefits of their talents and hard work.”

O’Leary went on to say, “This is fantastic news and of course I’m going to applaud it. What can be wrong with this?”

In response, O’Leary’s cohost Amanda Lang was silent upon hearing his comments. Lang asked her cohost, “So somebody living on a dollar a day in Africa is getting up in the morning and saying, ‘I’m going to be Bill Gates’?”

O’Leary’s response was a repetition of his previous comments about the world’s economic conditions serving as a source of motivation.

O’Leary’s comments have faced serious backlash from various news sources, with one contributor to Forbes writing that, “this is a moment for CBC and ABC to show some responsible leadership, and yank O’Leary off the air.”

Despite O’Leary’s comments, Oxfam is stressing the importance of its findings, with Byanyima warning that if no action is taken, “we will soon live in a world where equality of opportunity is just a dream.”