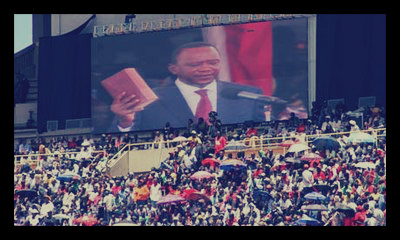 The new president of Kenya, Uhuru Muigai Kenyatta, was sworn in earlier this week, marking the beginning of the fourth presidency for the country. Although the election process was mired in tensions and left the country severely divided, Kenyatta made promises in his acceptance speech regarding the future of the country.

Kenyatta praised the people of Kenya for dealing with rough times following the introduction of a brand new constitution just three years ago and asserted that he will lead the country to better economic, social, and political times, promising to set aside differences even with those who did not vote for him.

He promised that all mothers would receive free maternal health care within 100 days of taking office, and also promised free laptop computers to every school-aged child starting next year.

Kenyatta went on praise the citizens of Kenya and said that he recognized their continued support during tumultuous and unstable times. He will be the first president under the new constitution that aims at reducing the president’s powers under the law.