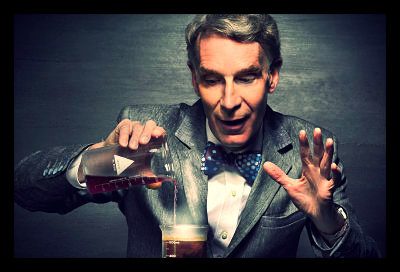 MYTH #1: The United States spends 25 percent of its budget each year on foreign aid.
Bill Nye compares the federal budget to a dollar bill. Though some people assume that the budget is a quarter, it is actually less than a penny. “You can’t even cut a coin small enough to represent how much money is spent on foreign aid. It’s not that much,” said Nye.

REALITY= The US spends 0.8 percent of its budget each year on foreign aid.

MYTH #2: Wars & natural disasters kill more people than anything else.
“This idea that wars or natural disasters, tsunamis, earthquakes, kill most of the people – that’s wrong. It pales, it’s dwarfed by the number of people killed by preventable diseases,” Bill Nye said.

Children are dying every day. Though progress has been made in global health, there are still deaths all over the world. Those in poverty are at an even higher risk of dying.

Health and economic advancements have allowed people to combat this risk. However, preventable diseases continue to represent 7 out of the 10 leading causes for child mortality. It accounts for 83 percent of child deaths, with non-communicable diseases at 11 percent and injuries at 6 percent. “This is where we can change the world,” said Bill Nye.

REALITY= The leading cause of death for children under the age of 5 is preventable disease (communicable diseases, birth problems, nutrition.)

MYTH #3: U.S. citizens give money to Africa and nothing changes.
“People think that we’ve been sending money to Africa for decades and nothing’s improved; things are as bad as they ever were.” Approximately 10.5 million children under the age of five die every year. In 1970, that number was 17 million.

The most impressive declines occurred in countries that showed considerable economic improvement, making our monetary contributions a positive piece of the puzzle. Foreign aid has helped these people.

REALITY= That money has been making positive changes, like cutting child mortality in half within the past few decades.

“We have a real opportunity to leave the world better than we found it, to dispel these myths and move on to improve the quality of life of people everywhere,” said Bill Nye. “So let’s prevent the diseases. Let’s address a preventable disaster.”