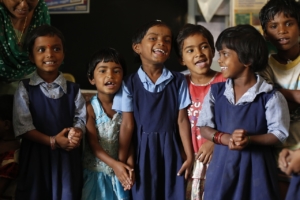 Right now, 130 million girls ages 6 through 17 are not in school. Fifteen million girls will never receive any kind of education. The international community has recognized the importance of rectifying this problem, including the elimination of gender inequality in education as a target of the Sustainable Development Goals. Despite the significant hurdles which remain, the number of girls in school has increased dramatically in recent decades indicating progress.

Between 1970 and 2017, the global average number of years a girl spends in school increased from 6.7 to 12.5. South Asia experienced the most amount of progress, tripling the average length from 3.8 to 12.

Several countries in South Asia have implemented programs that target keeping girls in school. Efforts in India largely drove the increase in rates, where average years of schooling jumped from 4.1 to 13, exceeding the 12-year target. Many nonprofits have worked to improve the educational attainment of Indian girls. For instance, ConnectEd brings education to girls at home when their parents do not allow them to attend school. Additionally, the nonprofit organization CARE has worked with the Indian government to provide educational programs for girls who have dropped out of school and to strengthen early childhood education. CARE also advocates for the bolstering of legislation and policies which ensure safe and secure access to education.

Bangladesh has also made significant strides in keeping girls in school. Secondary school enrollment for girls went up from 39 percent in 1998 to 67 percent in 2017. In 2008, the government of Bangladesh initiated the Secondary Education Quality and Access Enhancement Project (SEQAEP) with the help of the World Bank. This program provides stipends and tuition payments to impoverished children, especially girls. Teachers have received additional training and incentives to ensure that at least 70 percent of their class passes. Additionally, Bangladesh has taken steps to improve sanitation and water facilities at schools. Before the implementation of SEQAEP, 50 percent of children completed primary school and only one-fifth of these went on to complete 10th grade. Now, 46 percent of students graduate from secondary school, including 39 percent of children from impoverished backgrounds. Girls have experienced a rise in enrollment rates in particular due to a number of specially targeted stipend programs. Between 2007 and 2017, the gender parity ratio for grades six to 10 improved from .82 to .90.

Sub-Saharan Africa also made significant gains in the number of years girls spend in school, more than doubling the average from 3.3 years to 8.8. However, this region remains the worst in terms of keeping girls in school. In many countries in the region, girls never even get a chance to attend primary school. In the Central African Republic, Chad, Mali and Niger, two-thirds of primary school-aged girls do not enroll in school. In Liberia, this number is 64 percent, while in South Sudan it reaches a staggering 72 percent.

Nigeria has driven the current progress. Since 2007, the Nigerian government partnered with the World Bank to distribute grants and resources to school systems in particularly struggling areas. Programs that provide free meals and uniforms have incentivized families to allow their girls to obtain an education. Additionally, resources such as textbooks and expanded class space have made class time more effective for students and assisted in graduation rates. In one state, primary school completion rates for girls rose from 17 percent to 41 percent.

These statistics show that change is possible. Advancements in these countries show that even small investments in girls’ education can drastically improve their prospects.