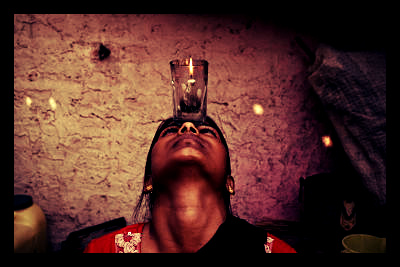 The Kathputli Colony is home to artists, musicians, performers, magicians and poets. It is, however, not home to adequate sanitation facilities, a sufficient water supply or a healthy environment for children.

The Delhi Development Authority (DDA), in partnership with Raheja Developers, a private firm, wants to develop the colony in West Delhi. The DDA sees the colony as a future home for apartment blocks, some of which will be sold to the residents at a reduced rate and others which will be offered at the market price to those who can afford it.

During the construction period, the DDA plans to move Kathputli residents to a transit camp and later rehabilitate them back into the multi-story apartment buildings that will replace their modest homes.

Due to population increases, building vertically will be the most efficient way to accommodate everyone. However, some Kathputli members are fearful that after moving away from their village, they will not be able to come back.

From Kathputli’s population of about 20,000, the government will move 2,800. The DDA chose candidates based on a survey done by a private firm in 2011 which indicated that 2,754 families deserved a place in the redeveloped Kathputli Colony. Those families will be moved to the transit camps and relocated back to the redeveloped colony.

Residents conducted their own survey and put the number of families at 3,200 because they were unhappy at the way the initial survey was conducted. Nonetheless, none of the residents, even those on the DDA’s original list, are prepared to move. Furthermore, representatives from the colony have demanded that a 15-square-yard plot be given to each resident to use how he or she pleases.
The representatives have insisted that if residents are able to develop their own plots from scratch, the true essence of Kathputli Colony will not only remain intact, but the infrastructure will become more developed. Though the Kathputli Colony is seen as a slum by many outsiders, the residents keep the colony alive with their art as well as music and, further, plan to continue their self-sustaining colony without government intervention.