In the early 50’s, Malaria was eliminated from the United States. The mosquito-borne disease, which can have fatal outcomes, is still a problem in other parts of the world, however. April 25 is World Malaria Day, which highlights the continued need for support for malaria prevention and treatment, and this year Katharine McPhee is stepping up to help out the cause.

“Every minute, a child dies from malaria. Every minute. That is pretty stunning. If that was happening in the States, there would be action right away. It would be an epidemic,” McPhee said.

Working with Malaria No More’s campaign, Power of One, McPhee is hoping to help prevent the deadly disease in Africa. Malaria No More aims to provide every African family access to the tools needed to prevent and treat malaria in their communities. The organization has provided mosquito nets to 17 African countries, and the Power of One campaign, launched in the fall of 2013, deploys tests and treatments to the area, to reduce deaths of children caused by malaria.

The organization is donation based, and every dollar donated funds a test and treatment for a child with malaria.

“One dollar, one life, it’s so simple,” says the singer-actress. “We’re hoping we can create a malaria-free zone.”

Originally, McPhee learned about the issue of malaria while funding a preschool in Africa. A family friend told her of the need for the school in the Nioko District of Burkina Faso‘s capitol, Ouagadougou; through their funding, it was opened in 2009. Through emails with the school’s headmaster she learned of the recurring cases of malaria affecting the staff and students. She decided then to “continue to help” with Malaria No More.

McPhee has travelled to Africa with Malaria No More in 2012, visiting the school she helped build, and distributing mosquito nets to the region.

She also promotes the cause back home, speaking to college students this year about Malaria No More’s cause and how they can help.

“The message is that this is a disease that nobody should be living with, and if they do get infected, it’s curable. They just need the right resources,” McPhee said.

Malaria, when left untreated, is a serious disease that can prove fatal, especially in young children. The World Health Organization estimated that, in 2012, over 200 million cases of malaria occurred worldwide; the cases resulted in 627,000 deaths, almost 90 percent of which occurred in Africa. According to the CDC, however, most malaria deaths can be prevented.

This is why Malaria No More and organizations like it are so important. With World Malaria Day this week, helping to treat the disease and prevent malaria-related deaths is as important as ever, with many opportunities for new donors and volunteers to help out the cause.

To help out, go to www.Po1.org to donate a dollar and fund a test and treatment for a child with malaria. 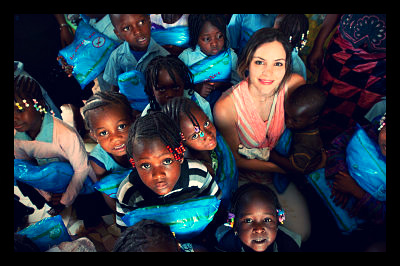 When Burkina Faso gained independence from France in 1960, the school attendance rate was 6%. Now up to 66%, the country still has a long way to go if it plans to achieve the Millenium Development Goal of attaining universal access for children to primary education.

Why do Boys Have a Higher Literacy Rate?

A girl in Burkina Faso is more likely to be married and give birth before the age of 18 than she is to graduate secondary school. Before she received a scholarship, Burkinabe 15-year-old Lucie walked more than 10 miles to school each day. With her new bicycle, she has an easier time getting to school and fetching water for her family. Boys have a higher literacy rate than girls in Burkina Faso because they are given preference in schooling.

Secondary Education Has a Price

Burkina Faso is the third-poorest country in the world as ranked by the United Nations. Some families hardly have enough money to buy necessities like food, much less pay for secondary education. While some countries in Africa are implementing a free secondary school system, Burkina Faso charges the equivalent of $166 per year for secondary school education, a mandatory fee that many Burkinabe families cannot afford.

Currently the free, public and compulsory education takes children through age 16. From age of 13 to 16 years old, children attend a “post-primary” school, which is intended to prepare the students for secondary school. When a fee is involved, as it is for secondary education, the government does not make schooling mandatory because many families do not have the means to pay for it.

A Pop-Star’s Dedication to Help

Burkina Faso is the seventh country to benefit from a BuildOn Project. Katharine McPhee, star of the NBC hit TV show SMASH and runner-up of the 2006 American Idol, and her husband, Nick Cokas, are partnering with BuildOn to expand access to schools in Burkina Faso. The couple provided mosquito nets to the country through Malaria No More and funded the construction of a school in the country’s capital, Oagadougou. Their dedication to Burkina Faso continues as they fund BuildOn’s first two schools in the country.

“Investing in education and opportunity for young people is a major priority in our lives, and we are thrilled that with the help of BuildOn, we can maintain our ongoing commitment to improving education for the children of Burkina Faso,” McPhee said.