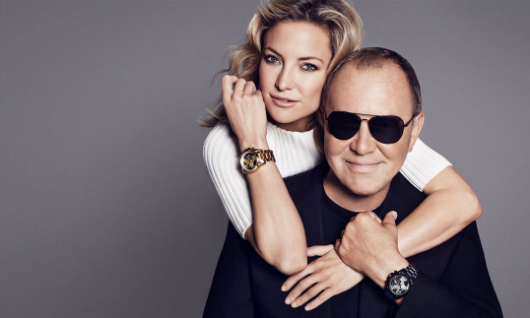 In the social media post, Hudson and Kors can be seen donning watches from the designer’s own collection, seemingly hinting that just as time is paused in the photo, hunger must be stopped in reality.

The award-winning actress’ first act of charity for Watch Hunger Stop will be to advertise Kors’ new styles of his Bradshaw watch. Each sale of one of these watches will provide a meal for one hundred children in need. Hudson showed her support by posting the ad on her Instagram, @katehudson, as well as speaking about her thoughts of world hunger.

“As a mother, I can’t think of anything more important than raising a healthy and educated generation of children, and World Food Program’s School Meals Program is committed to exactly that,” Hudson said. “This is a cause that I’m eager to be a part of because I believe we can all make a real and significant difference.”

The feeling of excitement was clearly quite mutual. Kors said he chose to work with Hudson because she contributes a positive and irreplaceable vibe to the charity.

“Not only does she have a unique star quality, but she also brings an incredible amount of generosity and a can-do attitude to a cause that is extremely important to me personally,” Kors said.

Kors creates timepieces specifically made to benefit his charity. He was named a United Nations Ambassador for his efforts, which presented meals to 10 million children in need. Kors’ determination is much appreciated by the UN, which said that almost one billion people worldwide go to sleep hungry–that’s 1 in 7 people on this Earth.

The UN also said that hunger not only affects the people suffering but also stifles economic growth in regions where hunger prevails.

“We also should remember that food is good business. When nations solve the problem, it fuels their economy,” said Josette Sheeran, the Executive Director of the World Food Programme in 2010.

With the help of donors and, now Hudson, Kors will continue to fight and raise awareness for hunger for the UN World Food Programme.

Hudson is no stranger to charity. The actress has also worked with Donate Life America, Fulfillment Fund, Healthy Child Healthy World, Last Chance for Animals, Red Cross and WildAid. Her partner in the Bradshaw watch campaign has also contributed greatly to multiple charities. Kors has volunteered to benefit disease, poverty, mental health, environment, conservation and of course, hunger. Kors will release the limited-edition styles of the Bradshaw watch in October of this year. With each sale, Kors will donate $25 to World Food Programme.

To learn more about the cause, visit http://destinationkors.michaelkors.com/watch-hunger-stop/ or search the hashtag, #WatchHungerStop.