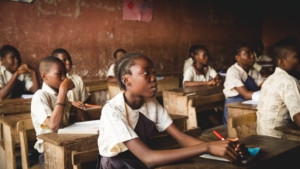 Education outcomes, a lack of funding, rapid expansion and inadequate management have led to low and declining education outcomes for girls and boys in Uganda. Since 2000, initial primary enrollment and attendance rates have increased; however, only one-third of students will finish their primary education.

Girls living in sub-Saharan Africa face some of the greatest disadvantages when it comes to gaps in education. Globally, over half of the out-of-school children live in this region, and nearly 40 percent of adolescent girls are out of school.

The reasons for this vary, however one of the most tenacious reasons is harassment from men. There is a lack of private bathroom facilities and it is very common for boys at school to target girls for consensual or forced sexual encounters which can harm the girl’s reputation. If she becomes pregnant, she’s forced out, while the father of the baby can continue with school.

Irene’s school in Uganda is a success story that stands above the rest and gives girls in sub-Saharan Africa hope. Irene Kamyuka, the youngest of four kids, was forced to drop out of her sixth year of primary school in 2012 because her father ran short of money. Kamyuka’s father told her that she could go back to school when her siblings were finished and he had saved up enough money.

However, because of her dedication and the generosity of others such as the Plan International Program, the 15-year-old is now in her first year at Kamuli Progressive College and stands as an inspiration to girls aspiring to stay in school. The international development charity is paying her term fees, which work out to about 20 U.S. dollars every three months.

Stories like Irene’s are not uncommon. Ugandans who live in rural areas, like in Kamyuka’s town Kamuli, make their living as subsistence farmers and run into difficulties paying for their children’s schooling. Though this East African nation’s government-run schools are free, parents who cannot afford to pay for uniforms, books and supplies cannot send their child to school.

According to preliminary statistics from Uganda’s Ministry of Education for the 2012 school year, the number of girls who qualify to attend secondary school stood at 343,000 in contrast to 408,000 boys. As in Kamyuka’s case, the outcome of their education is often interrupted or canceled completely.

How is the world helping?

Despite it being unusual for girls to attend school as far as the seventh grade in Uganda, the country is receiving support. UNICEF has been supporting Irene’s school in Uganda since 2015 by providing school supplies, as well as training teachers and building a new classroom block and latrines.

Similarly, the Plan International Program continues to help those in need to pay dues for school, and the Irene Children’s Support Organization (LICSOU) was formed in 2012. They work to respond to the overwhelming number of children who are dropping out of schools within rural communities like Irene’s school in Uganda. In order to accomplish their goals and help the greatest number of children, they plan on lobbying, advocating and improving community networking and collaboration.