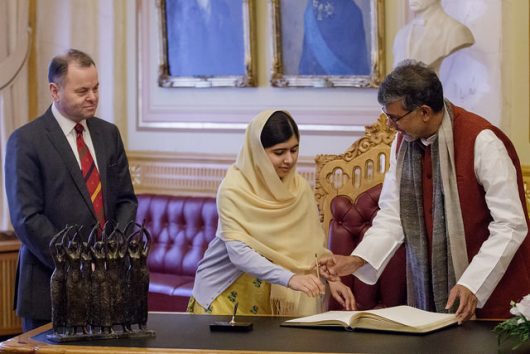 “One child, one teacher, one book and one pen can change the world,” Malala Yousafzai stated at the U.N. Youth Assembly, where she launched her international campaign to fight for the equality of all children.

Education is the art of unfolding and absorbing hidden knowledge. As a student matures, the pupil gains the ability to think for themselves, as well as the ability to differentiate fact from fiction. Absorbing the world like a sponge in order to gain knowledge not only enlightens the student, but molds them to better all of mankind.

In 2014, the Nobel Peace Prize focused on empowerment through education. Kailash Satyarthi and Malala Yousafzai shared this international honor “for their struggle against the suppression of children and young people and for the right of all children to education”.

Malala and Kailash dedicated their lives to the betterment of those around them, believing education is the means to lasting peace. Education can be obtained or earned, but cannot be stripped from the person.

Both Nobel Peace Prize recipients defied all odds in order to utilize their experience to touch millions of lives and fight for all children.

Malala was born in Pakistan during a time of chaos and violence. In 2012, she was shot by the Taliban, causing severe injuries and a long recovery. Throughout Pakistan, the Taliban often attacked young girls at school in order to discourage females from receiving an education.

This traumatic incident did not deter Malala from continuing her education, but instead encouraged her to pursue an international campaign from London. Threats from the Taliban poured into her mailbox and inbox as she pursued her recovery as well as her campaign for the universal right to education.

Her platform includes her published book, multiple speeches to the UN, meeting heads of state and traveling to various universities. She has quickly become the face of female empowerment through education and the fight for the education of all children.

In India, Kailash worked as a teacher until 1980, when he became inspired to do more for those most vulnerable. He founded the organization Bachpan Bachao Andolan, which frees thousands of children from exploitation each year. In order to protect their newfound freedom, all children go to school and get an education, the ultimate key to lasting freedom.

Throughout the United States and Europe, education can seem like a chore for some families. To those living in poverty around the world, putting on the school uniform is the embodiment of dignity and pride. Entering the classroom is the first step in breaking the cycle of poverty and domestic abuse, as well as providing hope to dreams.