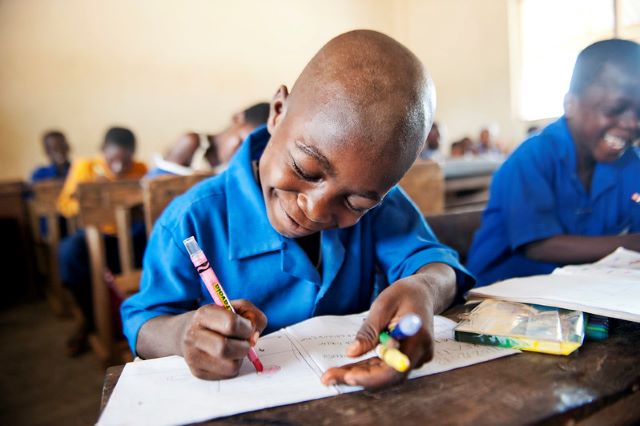 A healthy learning environment means adequate school supplies and sufficient and quality learning materials. School desks are often less thought of but are also essential resources that impact a child’s learning. UNESCO conducted a study examining the impact of school desks on children in the learning environment and found that a proper school desk is a determining factor in how a child processes information. In another study, it was found that sufficiently designed furniture is an essential factor in the development of the capabilities of school children. The quality of the learning environment influences the quality of education that a child receives. The Tutudesk campaign has found that more than 95 million children throughout sub-Saharan Africa lack school desks for classroom learning.

An adequate education can be the deciding factor in whether an impoverished child is able to progress out of poverty in adulthood. UNESCO’s Global Education Monitoring (GEM) team conducted an analysis of the influence of education on poverty in 2017. It was found that an estimated 420 million people could be alleviated from poverty with the completion of secondary education, reducing the number of global poor by half and reducing the number of poor people in sub-Saharan Africa and South Asia by two-thirds. Since school desks are essential for education, organizations are putting desks at the forefront of their initiatives.

South African human rights activist, Desmond Tutu, founded the Tutdesk campaign in 2012 in partnership with the United Nations Special Envoy for Education. The Tutudesk campaign recognized the dire need for school desks and workstations for students throughout sub-Saharan Africa. The campaign aims to supply portable and sustainable workstations for children in need of desks both in school and at home. Made from a robust, child-friendly blend of polymers, the Tutudesk workstation can last the duration of a learner’s school career. Since its launch, the nonprofit organization has provided more than 1.5 million desks to disadvantaged children. The Tutudesk campaign believes that the Tutudesk provides a viable solution to literacy development and the general infrastructure crisis. The organization’s current goal is to combat the severe desk scarcity throughout sub-Saharan Africa by delivering 20 million desks to children in need by 2025.

Lawrence O’Donnell in collaboration with UNICEF launched the K.I.N.D. (Kids in Need of Desks) campaign in 2010. When visiting  Malawi school teachers expressed the dire need for school desks to O’Donnell. O’Donnell collaborated with UNICEF and a local woodworking shop to fund the production of 30 school desks. This small initiative developed into the K.I.N.D. campaign. The organization seeks to provide desks for schools in Malawi as well as secondary school scholarships for Malawian girls. The K.I.N.D. campaign has brought desks to more than 938,000 Malawian children. The K.I.N.D. campaign hopes to enhance education for children in need through its efforts.

Education is the gateway to economic progression and thus the answer to solving global poverty. School desks play a prominent role in this. Quality education can provide a way out of poverty for poverty-stricken children around the world.  By providing desks to the impoverished, the K.I.N.D. campaign and the Tutudesk campaign address both education and poverty simultaneously.