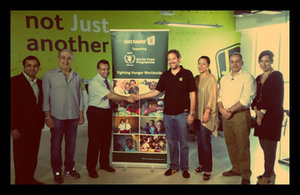 A fast food retail chain in the UAE, Just Falafel, has joined forces with the World Food Programme (WFP) to raise $1 million over the next three years. The money will go to fight hunger worldwide.  Over the next three years, $500 will be donated to the WFP for every new Just Falafel franchise opening worldwide. Franchisees will be encouraged to match the $500 donation, doubling the impact and allowing the WFP to feed twice as many people.

Business predictions estimate over 1,000 franchises will open before the end of 2016. With the matching donation program from both Just Falafel and the franchisees, the goal of raising $1 million is very much in reach.  Nearly 900 million people worldwide do not have enough to eat to lead active, healthy lives.  This makes hunger and malnutrition the number one health risk worldwide and gives organizations like Just Falafel a reason to contribute to fighting hunger.

As estimates report 1 in 8 people in the world are malnourished and many of these in the Middle East and Asia, Just Falafel has a personal connection to the cause.  Giving back to their communities is deeply rooted in the values and mission of Just Falafel. The partnership with the WFP takes that connection one step further and formalizes their commitment to fighting hunger.

WFP’s regional head of private partnerships and business development, Ashraf Hamouda, commended Just Falafel for their initiative and act of generosity to help fight hunger.  The WFP is working hard to end hunger, but they can’t do it alone and partnerships like this allow them to continue to fight.  Social Media will be a major player in Just Falafel’s strategy to raise awareness as well as promote new franchisees.