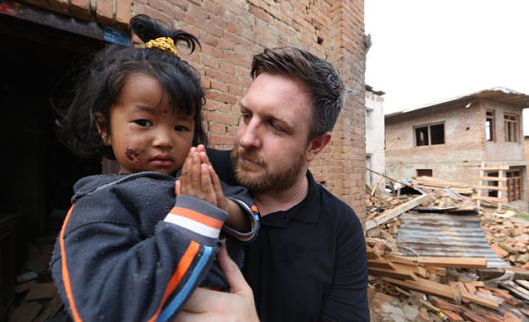 With six GroPros and a whole lot of determination, David Darg, a humanitarian aid worker and filmmaker, went to Nepal to report the aftermath of the earthquake. The film he produced gave people a first hand account of the devastation.

David Darg produced this film, called The Nepal Quake Project, with co-founder of RYOT Films Bryn Mooser. Darg and Mooser are part of a new wave of disaster relief: the collaboration of art and awareness with humanitarian aid. This new type of disaster relief helps those in need while also raising awareness of the problem, which in turn increases funding, support and volunteer involvement.

Darg and Mooser were previously aid relief workers. Mooser was in the Peace Corps and Darg got his start shooting films for a nonprofit, so they understand the ins and outs of disaster relief. This helped them to create relationships with the other aid workers as they filmed behind the scenes footage. “It’s our job to deliver food and water and rice, but it’s also our job to get the story out about what we’re seeing, to inspire people,” Mooser said.

RYOT films is not limited to earthquakes, they also created a behind-the-scenes film following the Red Cross during the Ebola outbreak in Liberia. This film won the 2015 Grand Jury Prize for Best Short Documentary at the Tribeca Film Festival.

The great thing about this journalism-humanitarian aid hybrid is that it combines art and personal expression with positive action in the world. Mooser acknowledges that this type of journalism appeals greatly to millennials because it is an easy and approachable way to open their eyes to a world of problems that their generation will solve in the future.

Since today’s world is reliant on real-time action such as receiving content and information in the moment on mobile devices, this filmmaking activism bridges the gap between humanitarian aid and real-time content. Now more than ever, there are new ways to deliver content.

“That’s what has been really exciting for us: We can now tell these stories that we’ve been wanting to tell in totally new ways,” Mooser says. “You don’t have to have a lot of money to tell a great story — you just have to be a great storyteller.” With this collaborative humanitarian aid and journalism, real-time, important content can reach the volunteers to-be in record time.