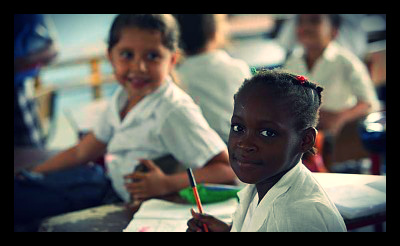 Josephine Bourne is the Associate Director of UNICEF. She sat down for an interview with the Inter Press Service to give her thoughts on the upcoming meetings to be held in Washington D.C. on the Global Education First Initiative.

The meetings will bring together Ministers in Finance from the Democratic Republic of the Congo, Haiti, South Sudan, Yemen, Nigeria, Ethiopia and Bangladesh. The topic of conversation will focus on sustainable solutions between the private sector and civil society organizations. The meetings will center around the importance of education on the global economy.

Bourne believes that the initiative will provide an increased pressure for political commitment in the field of education.  She stated that UNICEF would like to continue to work towards ensuring education for the most vulnerable children, particularly girls, with disabilities as well as children living in conflict territories.

When Bourne was asked if there was one thing in particular that greatly diminished a child’s opportunity to obtain an education, she bluntly stated that being born into poverty as a girl in a rural area is a huge disadvantage. The longer a girl is able to attend school, the fewer children she will have – an incredibly important factor in poverty reduction.

Around the world, girls who have seven years of education have 2.2 fewer children than those that do not. When those girls have children, those children will be healthier and better educated, helping to lower the poverty percentage in their given communities. Bourne believes that this environment leads to economic growth, more female leaders, and more sustainable development.

In the interview, Bourne was also asked about gender equality and education. She said that girls from disadvantaged groups are oftentimes the most marginalized because of the special risks that could take them out of school. She believes that there is serious inequity in schools around the world.

Women’s education and empowerment have been a popular theme in the media lately with the recent release of the documentary “Girl Rising”. While this is a very positive thing, Bourne was quick to note, however, that the increased media attention to gender and education inequality, as well as the empowerment that comes with it are not enough to bring about social change. In her opinion, in order to create lasting change, we need the complete commitment of all duty bearers; from organizations such as UNICEF and the UN to parents and communities; to be involved in the promotion of the human right of education for all children around the world.