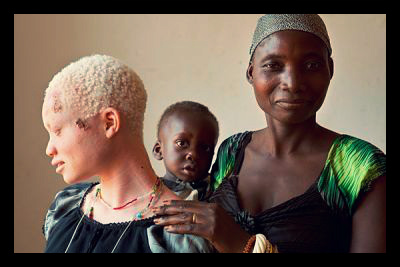 United Kingdom native, Harry Freeland was inspired to spread awareness of  albinism through a film documentary after his first encounter with the condition in Senegal. “A woman approached me in the street, held out her [albino] child and said ‘here, take it back, where it comes from.’ [B]ecause I’m white, she thought the child belonged to me in some way–her husband had left her for having a white child and accused her of sleeping with a white man,” said Freeland.

Albinism, a total lack of pigmentation in hair, skin and eyes, can affect people of every race, but is particularly prevalent in Tanzania and throughout East Africa, where it’s estimated that one in every 2,000 people are affected with it. The condition is passed to a child when both parents carry the gene, regardless of whether the parents have albinism themselves.

The real danger for those with albinism isn’t their heightened vulnerability to the sun, but the stigma that still exists concerning the potentially magical qualities of their body parts in potions and rituals performed by witch doctors. The miseducation and superstition surrounding individuals with Albinism has created a horrific market for their body parts in Eastern Africa. Many regions still believe that spells done with an albino’s hand, foot, breast or genitals will result in great wealth or miraculous healing.

Men with HIV/AIDS have been known to rape albino girls in the hope of curing their disease, and children with albinism are regularly kept home from school for fear that they will be attacked during their walk. Mothers are regularly blamed of sleeping with white men or devils to have produced a white baby, and many women prefer to kill or abandon their albino children rather than face the hardship of living with them.

Freeland’s film, “In the Shadow of the Sun”, follows Josephat Torner, a man with albinism, who has spent his life trying to break through the social stigmas surrounding his condition. Despite faces immense social injustice, Torner received his education, started a family, and climbed Africa’s tallest mountain, Kilimanjaro.

Torner and Freeland believe in fighting the mythologies of albinism by demonstrating to people the truth of the condition. The education and integration of albino children into society as working citizens, as well as the punishing of those who hunt them, is the only way to eradicate this dehumanizing practice.