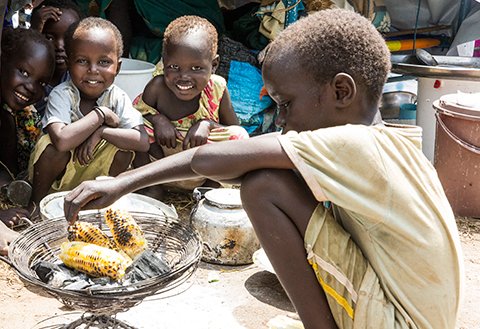 In Egypt, Sudan and Ethiopia, farmers have access to a service that functions through text messages. Provided by CGIAR, an organization focused on water, land and ecosystems, farmers can send a message through SMS (short message service) to request updates on the best way to grow their crops. People know this service as ICT, or Information and Communication Technology. According to CGIAR, farmers send one message code when they want to see an update on their crop growth and water-use efficiency compared to other farmers using the service. Based on this data, experts monitoring the farming data can identify irregularities and alert the farmer. One issue that CGIAR sees going forward is funding. Maintaining its database would require more funding than what farmers or smallholders have already offered. However, this service would be able to help farmers, in areas of need, increase the amount their farms produce.

Using ICTs to help feed people in need has shown promising results. An ICT service will help improve irrigation and water drainage in Egypt. This service has seen a 25 percent increase in crop yields during its first phase of implementation. Magrabi Farms has also implemented ICT to allow the proper irrigation of over 8,000 acres of land.

While this may seem like an idea from a sci-fi movie, 3D printing is a technology that may soon allow food printing. Jordan French, CEO at a 3D food printing startup called BeeHex, explains that 3D food printing could allow for customization of food products based on the certain wants and needs of the consumer. This could include developing food with certain nutrients that an impoverished community may be lacking, much like the recently FDA-approved golden rice, which emerged to treat a global vitamin A deficiency.

Jordan French also theorizes that 3D printing food could eliminate the need for distribution altogether, as it would create a bridge between the producer and the consumer.

The market for 3D-printed food is rising in profits by 46 percent each year until 2023. Mark Crawford of ASME.org alludes that this is due to how the technology could provide a solution to distributing food to people in need.

These technologies aim to tackle the challenges of distributing food to the impoverished for the sake of equal food distribution. Improving farming quality through databases and machine learning, watching the weather to allow for better distribution and even bypassing the need for food production are just some developing technologies that have the potential to assist the world’s hungry.