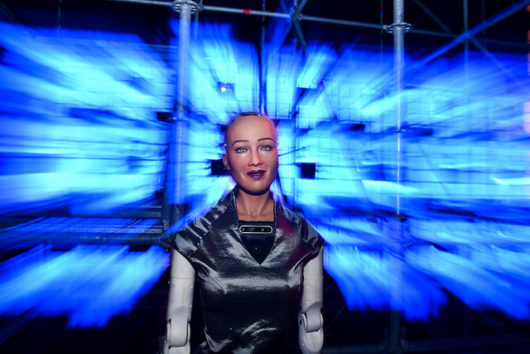 Technology is neither inherently good or bad; it is, rather, humanity’s use of technology that can be considered as evil or virtuous. Certain modern tools have the reputation for being capable of carrying out despicable deeds and are, therefore, surrounded by controversy. Artificial intelligence and drones are two of the most widely commentated on and feared applications of modern science. Despite this prevailing negative perception, combatting poverty is happens to be one of the good uses of AI and drones.

Drones, or UAVs (unmanned aerial vehicles), are often used in violent attacks and warfare, but they, along with their human operators, are also doing wonderful things across the world. Photographer Jonny Miller used drones to capture cities and show the line dividing the rich and the poor.

He captured images of lush, green golf courses directly up against dirt roads and shack neighborhoods. You can see giant mansions with trees and acres of grass next door to brown areas with buildings squished into a small plot. Miller’s project “Unequal Scenes” is raising awareness about poverty and inequality, which would be impossible without drone photography.

Another way that drones are helping alleviate poverty is through land mapping. More than half the world’s population, usually women, cannot prove they own their land. This is especially problematic in Kosovo where most of the men and boys were murdered during the Balkan wars in the late 90s. The women who remained have worked tirelessly to rebuild their homes and their communities. One enormous roadblock is their inability to use their vast land resources to provide for themselves economically.

These women do not have any sort of documentation for their lands once owned by their husbands. One woman explained that she had applied for loans to build her business, but she was repeatedly turned down because she lacked “property documents to put down as a guarantee.” These communities do not have the means to hire the land surveyors necessary for official registration. Property owners with potentially good, profitable land are powerless without official documentation for their land.

However, drones are helping these women. The World Bank Group’s Global Land and Geospatial unit dispatch drones to map out land plots for a fraction of the cost of traditional land surveyors, giving the Kosovan women the ability to register their lands and ultimately invest in their own property.

AI for Safety and Health

Artificial intelligence (AI), also referred to as “machine learning,” is the “capability of a machine to imitate intelligent human behavior.” It’s often associated with movies about robots destroying humanity that are based on the real fear that one day these machines will become self-aware and grow tired of serving humanity. “The development of full artificial intelligence could spell the end of the human race,” warned Stephen Hawking in 2014. Despite this destructive potential of AI, in the real world, it is currently transforming agriculture and changing businesses in Africa.

One article argues that Africa is amid the “fourth industrial revolution … ushered in by the power of AI.” Many innovative African business leaders have embraced AI to improve productivity and efficiency. One example is the Moroccan company Casky that uses AI to perform analytics on data sent from devices on motorcycle helmets. This has been improving riding habits and providing more accurate insurance premiums, reducing costs and improving safety for riders.

One Algerian firm helps local doctors provide cancer detection and treatment for their patients. The AI creates models that can diagnose those who are unable to visit hospitals for formal examinations. This has the potential to save many lives of those who don’t have the means to get regular checkups and screenings.

Another instance showing the advantages of AI is the reduction of consumer costs from companies like Niotek in Egypt. This company used AI to improve service quality and reduce the likelihood of human error. AI is also reducing overall costs for farmers and helping to improve their yields in India where RFID tags are being used in dairy cows to provide important information about the cows’ diets and overall health. The information is then stored in a “cow cloud” where it is “AI-analyzed.” The farmers receive alerts about any potential issues or if a cow requires their attention. This can reduce costs and increase efficiency for the farmers.

These are just a few of the many examples of good uses of AI and drones.  They have been especially useful in the fight against poverty. Cases like these prove that technology cannot be inherently evil and that there are good uses of AI and drones. While some individuals may want to use modern equipment to destroy the world, there are plenty of people looking to use the same tools to improve the world.