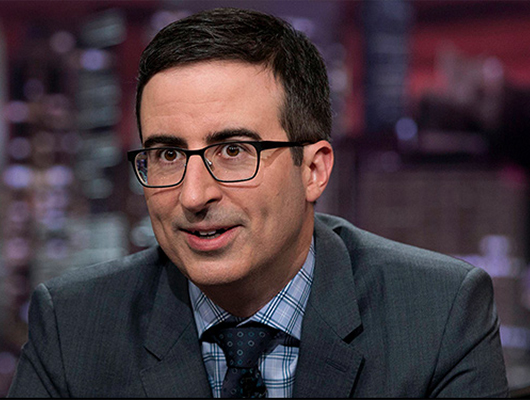 “That dress is worth four dollars and ninety five cents. Think about that. That means you could take a five dollar bill, scotch tape it over your genitals, and you’d be wearing a more expensive piece of clothing.”

The audience bursts into laughter. However, while John Oliver is all about getting laughs on his show “Last Week Tonight,” when it comes to blending the comedian and the activist, he’s not joking around.

The above quote is from a segment on sweatshops in the clothing industry, particularly modern, cheaper retailers.

Oliver’s use of his comedic platform as a springboard for his activism makes sense. Prior to his television show’s launch, Oliver was known for his role as a correspondent on “Jon Stewart’s The Daily Show,” and famously filled in for the beloved host in June of 2013, while Stewart was overseas filming his directorial debut.

The difference between Stewart and Oliver’s areas of focus is subtle but significant. Stewart focuses on news and current events, approaching them with a fresh spin, an important trait in a daily program. Oliver, on the other hand, focuses on issues. From food waste, which Oliver compares to Rascall Flatts in that “it can fill a surprising number of stadiums even though many people consider it complete garbage,” to tobacco giant Phillip Morris International threatening to sue Togo, a country with a GDP of just 4.3 billion dollars (“when your GDP is only a couple of billion more than the box office of Avatar, a protracted legal case is not really what you need.”) Oliver takes on major topics not just for laughs, but for information.

What is also unique about Oliver is how he encourages his audience to get involved. In his segment on the tobacco industry, for instance, Oliver christened “Jeff the diseased lung in a cowboy hat” as the new face of Marlboro. Oliver spread t-shirts of the diseased lung in Togo and billboards in Uruguay. Oliver also encouraged his audience to support the new icon, which mocked the tobacco industry’s marketing tactics, particularly in the developing world. It is through this type of culture jamming that Oliver achieves the power of comedy as a medium that influences social change.

Ultimately, “Last Week Tonight” could have been another late night television show, perhaps made a bit edgier due to its placement on HBO. But due to John Oliver’s social activism and experience gained while working with the great Jon Stewart, the show has become an informative springboard for activism, something with great impact on both its audience and the world at large.