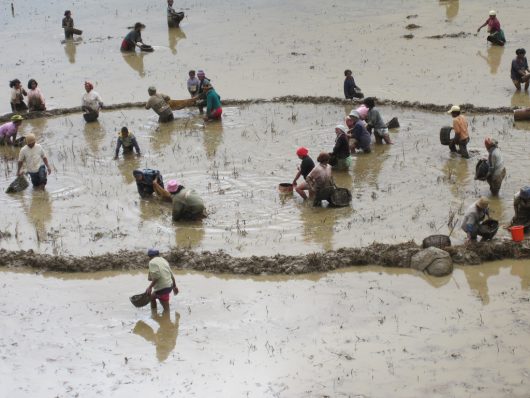 Many who hear the word ‘Madagascar‘, think of the family-friendly animated movie with dancing lions, lemurs, and other wild animals. This association overlooks the 22.9 million people who lack access to safe water in the country ranked fourth-worst in water quality in Africa.

Water is a basic necessity for survival, and 88 percent of people in Madagascar do not have access to improved sanitation. Over 2,100 children a year die from diarrhea because of unsafe and poor water quality in Madagascar.

Families who live in isolated villages do not have access to clean drinking water. Wells are contaminated with bacteria and viruses, and those who drink that water are exposing themselves to diseases. Most have no alternative to drinking the contaminated water.

Malalatiana Rasoanisina, a young Madagascar resident, explains that, “Twice a day I have to [collect water], it gave me a stomach ache as that water was yellow. I couldn’t go to school and had to go to the doctor.”

Madagascar receives about 449 billion m3 of water per year. So why is the water quality in Madagascar so unsanitary?

Madagascar’s government was not formally set up until a few years ago, which means that the nation was lacking the political or economic basis to provide solutions to the water problems. The nation has been relying on help from international organizations such as the International Development Association (IDA) and the Water & Sanitation for the Urban Poor (WSUP).

Even with the recent establishment of a formal government, people still face poor water quality in Madagascar. The public water and electricity company in the nation, JIRAMA (Jiro Sy Rano Malagasy), only covers a few areas of the nation, and JIRAMA faces an estimated debt of $27 million due to low water tariffs.

All people in Madagascar deserve clean water. Organizations such as the WSUP have been doing great work to help keep supply clean. They’ve helped improve water quality for over 700,000 people, improve sanitation services for over 180,000 people, and helped to improve hygiene practices for over 2.7 million.

Although many productive advancements have occurred in Madagascar, there remains a great deal of work ahead for the nation’s people. Many still need help and support, both inside and outside of the nation. Developed countries with safe, established water sanitation systems need to help Madagascar provide sanitary water to its people.