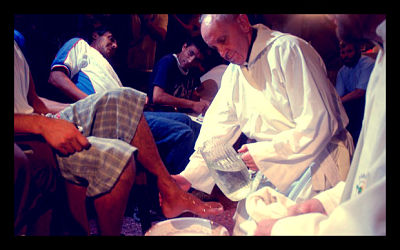 Pope Francis will deliver an encyclical this summer on the subject of climate change. In preparation for the speech, the Vatican’s Pontifical Academy of Sciences held a heavily attended workshop on April 28 in Rome. Included among the guest groups were the Committee For A Constructive Tomorrow and the Heartland Institute.

This brings to light a much more generalized question regarding religion’s role in the alleviation of poverty, or lack thereof. Fundamentalist Christians, for example, would read the Bible and disregard any pontifical command to pay attention to climate change.

The picture becomes even cloudier when politics are factored in. Most Evangelical Christians and Mormons are conservative Republicans who believe that the scientific evidence supporting the phenomena of climate change is inaccurate and/or falsified.

Katharine Hayhoe, a climate scientist and Evangelical Christian, attempts to bridge the gap between science and evangelical faith. She is a member of a statistical minority; according to the Yale Project on Climate Change Communication, only 44 percent of evangelicals believe that global warming is both real and the result of human behavior. Some politicians even believe that God would not let human behavior destroy the planet.

Hayhoe debunks biblical arguments such as those saying that bad things still happen even with a Judeo-Christian God in existence because that God grants free will to His people. “That’s really what climate change is,” she explains, “It’s a casualty of the decisions that we have made.”

She goes on to hypothesize that many evangelicals fear the concept of climate change for two reasons. First, they erroneously believe that all scientists are atheists. Second, their typically conservative political viewpoints biases them against any and all potential “big government” interventions.

To make matters of religion and politics even more complicated, most Jews lean politically left and are beginning to take active steps as a community to alleviate climate change. The Reconstructionist and Reform movements tend to be the most liberal, followed by the Conservative and Orthodox Jews. Generally, the more traditional the sect is in its practice of Judaism, the less environmentally active that movement tends to be.

Consequently, researchers find a startling, ironic commonality between the most observant Jews and the most observant Christians. It appears that the more conservatively a religious sect’s people practice that religion, the less likely they are to take steps to stop climate change.

Adding fuel to that fire, it is the poorest populations that suffer the most from the effects of climate change. The one demographic that both Jewish and Christian ideologies make the most efforts to help is the very group that falls on the receiving end of their most devout groups’ inaction.

So what is to be done? Should the secular American population vote in politicians who choose religious freedom over environmental activism, or vice-versa? Maybe the next election cycle will bring forth more people like Katharine Hayhoe, but then again, maybe not. Only time and ballots can tell.

HIAS, the Hebrew Immigrant Aid Society, was founded in 1881, and its initial goal was to help Jews in Russia and Eastern Europe escape from the pogroms. As an organization, HIAS has maintained its original goal of helping Jews around the world flee undesirable, threatening situations, as well as managed resettlement programs for the individuals who must leave their homes.

Operating through the values of dignity and respect, empowerment, welcoming, collaboration and teamwork, excellence and innovation, and accountability, HIAS partners with other local refugee assistance organizations in order to maximize the amount and quality of care that goes towards helping refugees settle into new environments.

HIAS endeavors to not only provide refugees with physical freedom and aid, but also with emotional and psychological support. HIAS gives legal protection to those separated from their children, those seeking asylum, those who need medical attention and those who need protection from danger.

HIAS offers psychological counseling to refugees in order to help them deal with both the trauma they experienced in their old homes and with the shock that comes with moving to a radically different place. HIAS’ goal is to provide refugees with the chance to create a sustainable new life for themselves.

An example of HIAS’ success includes the securing of an asylum in New Jersey for a Syrian refugee who was being targeted by the Assad regime. Additionally, HIAS is managing to sustain a growing community of individuals coming from Iraq to Toledo, Ohio.