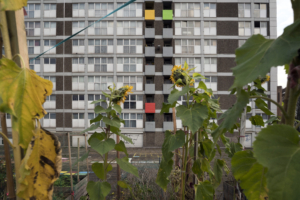 From rooftop beekeeping in Brooklyn to underground tomato growing in Tokyo, the urban farming movement has become a global phenomenon. One recently produced short film, Kombit, looks at how urban farming has benefited one of Haiti’s poorest communes—Cité Soleil.

The film was produced in response to a Sundance Film Institute’s challenge to filmmakers. The institute had partnered with the Bill & Melinda Gates Foundation and was looking for short films that showed people overcoming poverty.

Directors Jeff Reichert and Farihah Zaman traveled to Port-au-Prince and unearthed a story about one community’s successful project in the post-earthquake context.

Of Cité Soleil, one of the film’s interviewees says the common perception is that the area is “hell,” but this perception ignores how people struggling to live there manage to get by. For example, in this “hell” people have developed a community garden, called Jaden Tap Tap, that has “considerably changed the view that nothing can work in Cité Soleil,” according to the aforementioned interviewee.

Initially, some denizens of Cité Soleil had started a soccer club to foster amity in the community, but many young people said they were too hungry to play soccer. Tactics were changed then, and Jaden Tap Tap was started.

First, some community members appropriated a spot that criminals had been using to covertly execute people, clearing the area to make it suitable for gardening. That was in 2006; now, Jaden Tap Tap is the largest urban garden in Haiti.

The garden has become a recourse for those in need. People can notify the garden manager, Blan, of their needs and stop by to harvest greens, carrots, olives or other produce. One interviewee said, “Thanks to the plants in the garden, like the olive tree, we fight malnutrition.”

Jaden Tap Tap has inspired many Haitian families to begin growing their own food—thereby improving their food security and reducing malnutrition in a country where malnutrition is the leading cause of death for children five and younger. Even the smallest gardens, which are grown in car tires, help alleviate some of the burden of poverty.