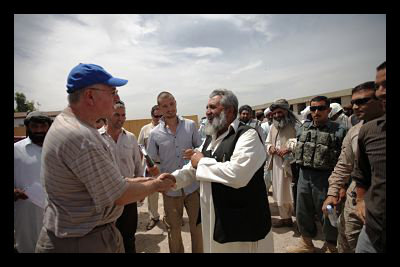 Picture a world without suffering. Is it possible?

To some this may be but a far-fetched dream, but Dr. Arthur B. Keys, Jr. has set out to make this dream a reality.

Founded in 1998, Dr. Keys and his wife, Jasna, established International Relief and Development, a nonprofit organization that fights to relieve the suffering of the world’s most vulnerable and marginalized population through active engagement, empowerment and inclusion.

Over the years, IRD has provided $3.9 billion in humanitarian assistance to over 40 countries, including Afghanistan, Colombia, Ethiopia, Iraq and Ukraine. The organization heavily focuses on conflict zones and areas damaged by natural disasters. To improve the livelihoods of these people, the IRD believes it is best to provide the resources and training to become self-sufficient. Thus, rather than just providing clean water to a community suffering from drought, International Relief and Development aims to address the root causes of the problem, such as upgrading water pumps and management systems.

IRD has tackled issues ranging from a lack of schools in Haiti to impoverished women  in Mozambique to malnourishment among students in Laos. By organizing short-term and long-term interventions, they foster the path to a more developed and prosperous nation. But how does IRD get the funds to take on all these projects?

The nonprofit organization collaborates with many other agencies and donors, one of them being the U.S. Agency for International Development. As a contractor, 4,000 staff members all over the world carry out many of USAID’s programs in hopes to improve infrastructure, healthcare and governance in war-torn countries. The U.S. State Department as well as numerous UN agencies also fund IRD’s annual budget of $400-$500 million.

One of its most recent successes took place among refugees and internally displaced persons in Yemen, a country that hosts over 200,000 people from Eritrea Ethiopia, Iraq and Somalia.

Refugees and internally displaced persons all face similar struggles, but in a place where political instability and high unemployment wreak havoc on daily life, coping with the current circumstances becomes increasingly difficult.

Realizing the dire urgency, IRD has set out to assist the thousands of refugees and internally displaced persons. After assessing the deprivations and needs in the refugee camps, IRD along with the United Nations High Commissioner for Refugees worked to provide monthly allowances to the families. They also distributed thousands of dollars worth of school and medical supplies, hygiene kits and other goods to many school children and families. The United Methodist Committee on Relief donated most of the gifts. IRD also targeted many vulnerable groups, such as pregnant women and sexual abuse survivors, by establishing care centers and providing group therapy.

International Relief and Development continues to provide relief and assistance in the world’s hot spots. By going into desperate communities and initiating development, this organization guides countries to economic growth and stabilization. Success stories are seen all over Africa, Asia, Europe and the Middle East, but the range of IRD’s success does not stop there. Success like this is everlasting and enduring.