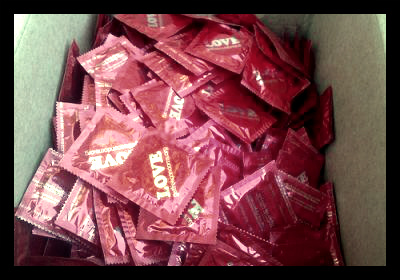 Efforts to increase condom usage are picking up across Kenya, one of which involves limousines and flower petals. Over this past Valentine’s Day weekend, Faith Ndiwa launched her condom delivery service and so far has helped more than 4,000 clients. The condoms are usually delivered on motorbike, though the limousines and bouquets of flowers were offered as a Valentine’s special.

Ndiwa was inspired to start her business after several of her friends died from HIV, she told BBC. “Most of them died of AIDS because they shied off buying condoms,” she said. In Kenya, sex and condom usage remain a taboo topic, which inhibits many from buying condoms out of embarrassment.

Though prevalence rates have dropped from 7.2 percent to 5.6 percent since 2008, more than 1.2 million Kenyans are living with HIV, says a recent government survey. The capital city has a higher prevalence rate, however, as nearly 8.6 percent of Nairobi’s population are infected with the disease. As Nairobi County government health director Samuel Ochola reports to the International Business Times (IBT), Nairobi sees about 13,510 new adult infections per year and 1,715 new cases in children.

Ndiwa’s business joins several initiatives already in place around Nairobi to raise awareness and encourage condom usage. February 13, 2014 marked the first ever International Condom Day in Nairobi. The National Aids Council (NACC) and the National AIDS and STI Control Program (NASCOP) embarked on a campaign to distribute one million condoms across the metropolis.

The AIDS Healthcare Foundation-Kenya (AHF-K) also capitalized on the Valentine weekend to promote safe sex practices. The non-governmental organization distributed 200,000 condoms and aimed to test more than 5,000 people for HIV. According to the IBT, the group hopes to test at least 250,000 people by year’s end and dispense four million free condoms.

The nation’s First Lady has also gotten involved in HIV prevention. In late January, First Lady Margaret Kenyatta launched her “Beyond Zero” campaign, which aims to improve maternal and child health outcomes and “accelerate the implementation of the national plan towards the elimination of new HIV infections among children,” says United Nations AIDS. The campaign is part of a strategic framework to monitor and prevent HIV released on World AIDS Day in 2013. The First Lady is putting on a First Lady Half Marathon on March 9, with registration fees benefitting the “Beyond Zero” campaign.

These efforts have made a noticeable difference. “There is an increased use in condoms which has greatly contributed to the reduction of those infected with the HIV virus,” reports NASCOP deputy director Martin Sirengo to AllAfrica.com. “Five years ago, only one out of 10 people used condoms and today approximately seven people use condoms.” While this is good news, efforts such as those of Faith Ndiwa and First Lady Margaret Kenyatta are needed to further encourage safe sex practices and reduce HIV throughout Nairobi and all of Kenya.