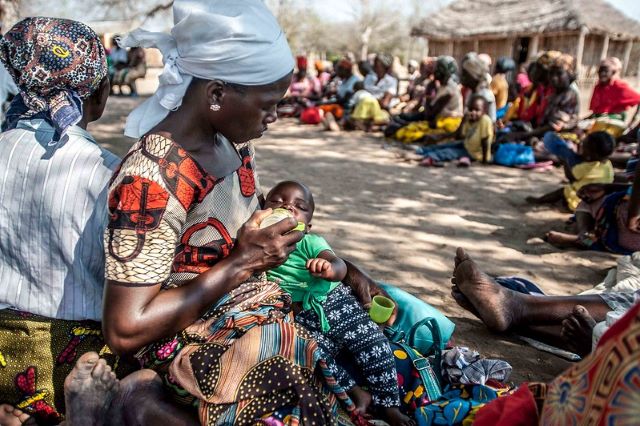 The provision of foreign aid from the United States serves as a multifaceted solution and preventative measure to many issues that ultimately impact the United States. In assisting with the development of under-resourced countries and those afflicted by natural disasters and conflict, the country’s interest in strengthening U.S. eminence in the global political ecosystem is served, as is the initiative to foster and stabilize democracies that are essential in maintaining global peace. Mozambique is one such country that receives aid from the United States. Nearly half of the population lives in poverty and while having managed to combat that statistic with an annual decrease of 1%, the country continues to see rising levels of inequality. USAID’s 2019 assistance investment in Mozambique totaled $288 million. Foreign aid in Mozambique is being used in several key developmental areas.

A significant portion of U.S. foreign aid has been invested in providing basic education. This foreign aid in Mozambique has been applied in conjunction with the country’s national budgetary allocation of 15% for basic education. This initiative has led to improved access to education with the abolishment of enrollment fees, an investment in free textbooks, direct funding to schools and the construction of classrooms. With access to education improving, Mozambique now moves to focus on developing the quality of education it provides and extending the initiative of improving access to those who are in the early learning stage. Only 5% of children between the ages of 3 and 5 have access to such services. Moving forward, educational initiatives aim to focus on the improvement of teacher training, the retention of students (as only 8% continue onto secondary level) and optimizing the management and monitoring of education nationally.

A large part of foreign aid in Mozambique has been committed to battling humanitarian crises. Cabo Delgado is the northernmost province of the country and is experiencing an insurgency that is decimating its infrastructure and food security. As a result, there is an ongoing displacement of the population. In November 2020 alone, more than 14,300 displaced people arrived in the provincial capital Pemba. The World Food Programme estimates the cost of feeding internally displaced people in northern Mozambique to be at approximately $4.7 million per month, aside from the housing costs and the complexity of managing the crisis amid a global pandemic. This allocation of the country’s foreign aid will be vital in maintaining the wellbeing of people during the conflict and restoring the country’s infrastructure once the insurgency has subdued.

The bulk of foreign aid in Mozambique goes toward the many challenges the country faces with regard to health issues such as funding family planning, battling tuberculosis, maternal and child health as well as water and sanitation. More than $120 million goes toward this initiative but the most pressing of the issues is mitigating the HIV/AIDS epidemic. In 2014, Mozambique ranked eighth globally for HIV cases. With the support, antiretroviral therapy and testing has expanded, which is evidenced by more than a 40% drop in new cases since 2004. Additionally, with a sharp increase in the treatment of pregnant women who carry the virus, one study recorded a 73% drop in cases among newborns between 2011 and 2014. The executive director of UNAIDS, Michel Sidibe, has claimed that the epidemic could be completely eradicated by 2030 if such a rate of progress continues. 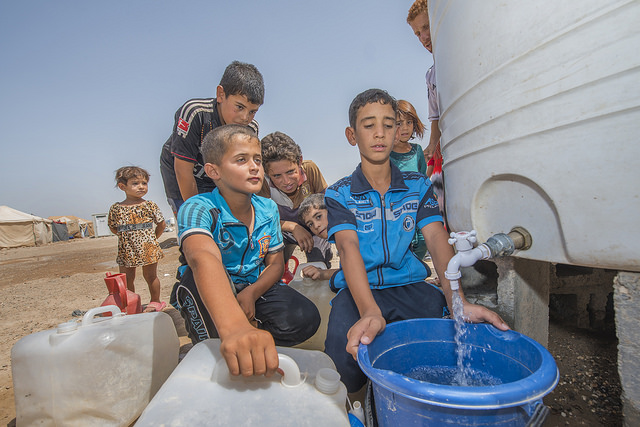 Over three million people are without safe, stable homes. Thousands are crowded in one place either because they have nowhere else to go or they are too frightened to move, and all they want is a chance to catch their breath. That is what life is like every single day for the people of Iraq.

In 2014, ISIS launched a siege. Ten or more Iraqi cities fell under ISIS control. Families fled to find safety in neighboring lands and people huddled together in an attempt to survive.

Such unity comes with a price. People in Iraq are suffering from a lack of food and shelter. If water is accessible, it may not be safe to drink. People all over the country are in need of medical assistance. Women and girls silently call out for protection and understanding, and there does not seem to be enough of anything to go around.

But despite these circumstances, organizations have successfully provided humanitarian aid to Iraq. Since 2003, the Internal Rescue Committee (IRC) has put forth efforts to relieve the burdens of the people. Legal aid is provided to those needing help by recovering identification documents lost to them. The IRC also gives cash donations. It is estimated that as much as $400 is granted to individual families. In addition to general education, the IRC offers parenting classes that actively discourage violence towards children. Mobile teams are put in place to protect and provide necessities to women and girls who are forced to live in refugee camps.

The IRC has been so successful in their quest to provide humanitarian aid to Iraq that they now operate in 13 different provinces. The organization receives funds from others who have a common concern for humanity and have set up their own fundraising campaigns to donate money to the cause. Rescue gifts are often received from outsiders, and volunteers devote their lives to helping the IRC deliver the bare necessities to the Iraqi people.

Another organization, the Iraq Foundation (IF), was successful in its efforts to teach 365 men and women how to read as well as teach them computer skills. The Mdaina Education Project generated the opportunity for income.

The IF also started a leadership program for women called Empowering Returnee Women. The goal of this project is to encourage women to be spokespersons for their communities and people in need. These women are offered a chance to learn skills in communication, advocacy and negotiation.

The IF is always open to donations. Funds acquired go towards civil development, establishing democracy and education on human rights.

When it comes to monetary donations to Iraq, Australia and the U.S. are leading the way. The Australian prime minister pledged $110 million towards humanitarian aid to Iraq in April 2017. This brings the total amount of aid provided by Australia to $180 million. The funding provides food, medical treatment and clean drinking water.

In July, the United States became the largest donor of humanitarian aid to Iraq. Announcing a promise to send an additional $119 million, the total amount donated rose to $1.4 billion. More food and clean water will be made accessible to refugees, as well as protection and shelter. These funds will also go to support three field hospitals that administer medical treatment to those in need.

There is still work to be done. Cities and homes need rebuilding. Communities need fostering. Men, women and children need simple, basic necessities. But as humanitarians around the world succeed in answering the call to aid, the amount of people suffering significantly dwindles.

Representatives from Israel, Germany and Kenya signed a treaty that will initiate the second phase of the plan to protect Lake Victoria.

The Lake Victoria treaty was signed on July 11 in Nairobi.

Phase I involved promoting tilapia fish farming in an effort to support the community’s economy and livelihood. Phase I also included implementing a better system to manage the water waste in the Lake so the tilapia could more readily thrive.

Phase II will involve extending the project and funding and cooperation from the three countries that signed the treaty. Through this second phase, the treaty aims to ensure that the three countries will work to “enhance sustainable ways of protecting Lake Victoria’s environment but creating alternative livelihoods for the communities living around the lake.”

Plans to create lasting means of support involve building more ponds in Kenya to expand the areas in which tilapia can be raised and later used for food.

President John F. Kennedy was at the forefront of the transformation of US foreign assistance. He understood that there was a need for development to be combined into a single organization to promote social and economic development abroad. The values that guide USAID are rooted in our nation’s commitment to doing the right thing.

The agency’s model is also based off of the success of the Marshall Plan following World War II. The Marshall Plan allowed countries to rebuild their infrastructure, strengthen their economies and stabilize. This plan led the United States’ recognition that International Aid needed to become a part of our foreign policy strategy. We realized that investing abroad would reduce poverty, and create new markets for US products.

The precursors to USAID included a Mutual Security Agency, a Foreign Operations Administration, and an International Cooperation Administration. When USAID was signed into law in 1961, international development assistance opportunities grew tremendously, sparking what would become known as the “decade of development”.

In the 1970s, the agency shifted their focus to basic human needs. This approach focused on food and nutrition, population planning, health, education, and human resources development.

The 1980s saw yet another shift with foreign assistance aimed at stabilizing currencies and financial systems. USAID refocused on their commitment to broad-based economic growth, working to revitalize economic systems and promote employment and income opportunities.

The 2000s have focused on war and rebuilding. USAID has launched programs calling for reform. The agency has helped Afghanistan and Iraq rebuild their governments, infrastructure, civil society, and basic services including healthcare and education. USAID has begun reaching out to the private sector in order to help stretch its funding as much as possible.

USAID occupies more than 100 countries with the same overreaching goals set out by President John K. Kennedy in 1961. USAID aims to further America’s foreign policy interests in expanding democracy and free markets while also extending a helping hand to people struggling to make a better life, recover from a disaster, or striving to live in a free democratic society. 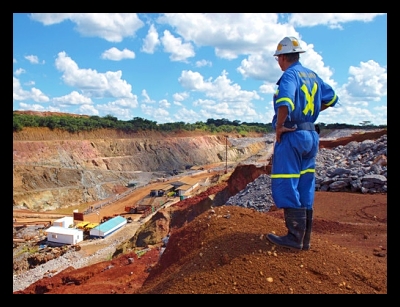 We look at sub-Saharan Africa today and see a region in transition. Many countries struggle and the region as a whole faces larger poverty rates than most of the world, yet we also see a few bright spots, countries moving in the right direction. Though, we do not always see the opportunity for the sub-Saharan Africa to entirely transform itself, this transformation could occur sooner than we think.

The untapped wealth of resources in Africa is huge, and many countries have the opportunity to turn that potential wealth into gains for people living across the income spectrum. Already, we are seeing some signs. A third of African countries’ economies grew by rates exceeding 6 percent in 2012. Global demand on resources is going anywhere but down. What remains to be seen is how the countries tap into that demand. Natural gas could become a major export of Mozambique and Tanzania, and large deposits of iron ore can be found in Guinea and Sierra Leone, copper in Zambia, and cobalt in the Democratic Republic of the Congo.

The question is how all this will  be managed. African governments will need to reverse a worrying trend of corruption. In order for the region to see long-term gains, money will need to be reinvested into education, healthcare, and agriculture. Too often the money needed to build up the necessary infrastructure is instead skimmed off the top. However, this problem is not solely the fault of corrupt government. Off-shore registered companies operating in Africa create multiple avenues for tax evasion. These companies, run primarily by foreign investors, extract wealth from the region whilst returning very little in terms of financial support.

The solution then will need to be a combination of stronger local government, investing within to create a stable platform for growth, and also international assistance, in a regulatory fashion. International cooperation on taxation is on the agenda for the upcoming G-8 summit. Cracking down on the extraction of wealth, from both abroad and at home, will be crucial to setting Africa on the path to realizing its full potential.