Tag Archive for: Infrastructure in Micronesia 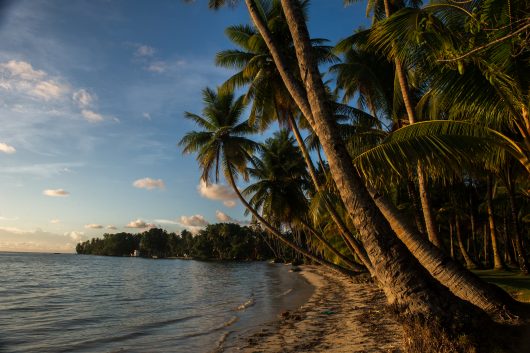 NASA has stated that the Earth’s carbon dioxide levels have risen dramatically since 1950, from 320 parts per million to more than 400 parts per million. This has caused many critical issues, including rising temperatures, melting glaciers, abnormal natural disasters and rising sea levels. This problem poses a great threat to every country on Earth. However, it is a particular danger for Micronesia, a country of 607 tiny islands that are on average one to five meters above sea level.

The EM-DAT International Disaster Database indicates that climate change-related natural disasters are predicted to increase and become more intense. Micronesia is especially vulnerable to these disasters due to its location and the fact that much of the infrastructure in Micronesia is located in close proximity to the coast, inducing infrastructural damage and putting many lives at a growing risk.

The islands of Micronesia are endangered by rising sea levels. A recent Journal of Coastal Conservation article stated that the sea level surrounding the island of Pohnpei is rising by 10 to 12 millimeters per year, a dramatic increase compared to the global average of 3.1 millimeters per year. Other islands such as Nahtik and Ros have already lost 70 and 60 percent of their landmass respectively.

Micronesia has already taken steps to lead on climate change policy. In 2007, they ruled out the use of hydrofluorocarbons (HFCs), the fastest growing greenhouse gas, in refrigeration and cooling units. As a result, other countries followed in banning HFCs. The Climate Change Act was passed in 2009 to use the knowledge of climate change and predictions to prevent island damage. Amended in 2013, the act now requires the government to adhere to climate change policy when risk planning.

With knowledge of Micronesia’s challenges, the department of geology and geophysics at the University of Hawaii has developed suggestions that will improve the durability and safety of infrastructure in Micronesia to ensure adaptation to rising sea levels and natural disasters. New roads should be built a meter taller in many of the islands, including Chuuk and Yap, to mitigate the rise in sea levels that will occur during the infrastructural project. To maintain these roads, they will be elevated a foot every 25 years. They suggest this is a cost-efficient way to improve roads in the midst of increasing sea levels.

If this advice is adopted, the infrastructure in Micronesia will be better equipped to withstand the increasing climate change challenges that face them in the near future.