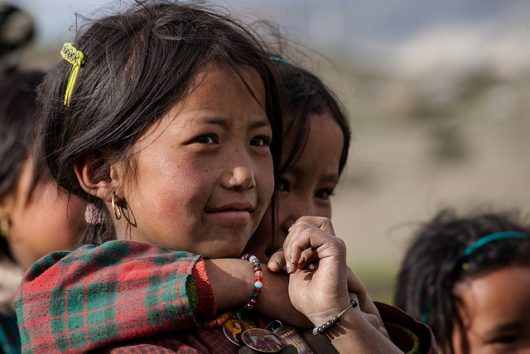 After 20 years of battling trachoma, Nepal eliminated the disease as a public health issue, becoming the 6th country in the world to do so. This success was not the result of a new cure or vaccine, rather public health education and community health volunteers who reached impoverished areas that lack access to immediate health care services.

The Female Community Health Volunteers (FCHV), a network of over 50,000 female public health volunteers, played a significant role in the diagnosis and treatment of trachoma in Nepal, specifically in impoverished areas, strengthening the country’s response for this endemic. The nature of the program contrasts the clear disparities in gender equality present in Nepal, slowly mending public health access and education in parallel to gender inequality in South Asia’s poorest country.

FCHV is a network of female volunteers focused primarily on providing maternal and child health care services in impoverished areas of Nepal. The program was initiated in 1988 by Nepal’s first female health minister and originally was assigned to distribute and promote family planning commodities and education in an effort to decrease the country’s infant mortality rate.

As the program evolved, FCHV began encompassing other aspects of public health intervention, including vaccination, testing children for malnutrition and pneumonia, diagnosing infectious diseases and linking communities to health workers and facilities.

The program is now comprised of over 52,000 active volunteers, approximately one in 500 people, or one per ward designated by the Village Development Committee (a local administrative body). FCHV’s live in the wards they serve and must be married, according to the program’s guidelines. They are selected by local groups of women active in health activities, after which they receive 18 days of training on topics they will oversee as volunteers.

The program has been revised four times since its inception, defining its responsibility towards local governments and adding curative services and predefined health programs. FCHV receives the majority of its funding from two primary donor agencies, USAID and UNICEF, supplementing funding for education and training materials. Nepal’s government provides salary funds and materials for distribution, such as drugs, vitamins and vaccines.

The FCHV also provides new opportunities for impoverished women who otherwise wouldn’t be presented with a variety of occupational options. Approximately half of Nepal’s female population is literate which represents a very low number. Approximately 17 percent of Nepalese women have some secondary education, and nearly 75 percent of Nepal’s unpaid family labor force is female. A large portion of economically active Nepalese women has little to no access to economic resources.

Nepalese women and girls are often disadvantaged by practices such as early marriage and son-preference, seclusion of women, polygamy, segregation of women and girls during menstruation and stigmatization of widows. Nearly half of Nepal’s female population marries between the ages of 14 and 19.

By enabling women to become involved in their communities, FCHV sets an example for the future, leveling the playing field by educating women in health care, a universally distinguished and necessary occupational field. Education breeds empowerment and lifts people out of poverty.

FCHV maintains the national goal of health through public involvement, imparting knowledge regarding health-related issues through local institutions and populations while simultaneously empowering women. Its success in aiding the elimination of trachoma in Nepal is a testament to the program’s importance.

A 1981 health survey discovered that approximately 1 percent of all Nepalis were blind and cataracts and trachoma were the two main causes of this problem.

Trachoma is an infectious disease caused by the bacteria chlamydia trachomatis. In rural areas, this bacteria is commonly spread by flies crawling on children’s faces. People are usually infected as young children, however, the permanent eye damage caused by trachoma typically sets in decades later. Trachoma prevalence rates among preschool-aged children exceed 60 percent. This risk is compounded by environmental factors including poor hygiene, water shortages and inadequate sanitation facilities. Eye damage and blindness caused by trachoma are irreversible.

Trachoma also places a substantial economic burden on affected individuals and communities since the economic cost of lost productivity is estimated at up to $5.3 billion annually. Controlling the disease releases huge portions of Nepal’s population from the financial strain of trachoma, providing them with more disposable income and monetary influence.

The FCHV will continue to shape the way Nepal institutes public health initiatives, empowering and educating women in the process.