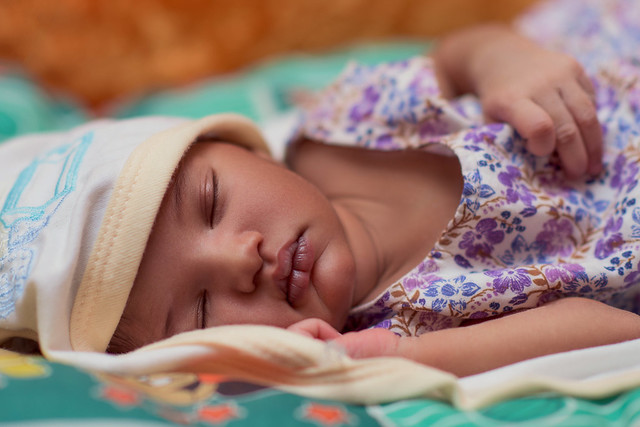 Over the past 10 years, infant mortality in Nepal has decreased. The number of infants dying before they reach age one has been reduced by more than 50 percent. In 2006, the United Nations Populations Fund ranked Nepal as the most affected by infant and maternal mortality in South Asia. Not many people know what chlorhexidine does for Nepal. However, chlorhexidine is becoming more common in routine care nationwide. Over 1.3 million newborns throughout Nepal benefit from this product.

Chlorhexidine is an antiseptic used in hospitals to disinfect the skin before surgery and to sanitize surgical tools. In countries like Nepal, it is used to prevent deadly infections by protecting the umbilical stumps of newborns. It is safe and affordable. Chlorhexidine comes as either a gel or a liquid. It is easy to manufacture and simple to use. Mothers, birth attendants and others with little training in low-resource settings benefit the most from this antiseptic.

Between November 2002 and March 2005, Nepal Nutrition Intervention Project, Sarlahi (NNIPS) started a community-based trial. The trial hoped to determine the effects of chlorhexidine on newborns. Nepal Health Research Council and the Committee on Human Research of the Johns Hopkins Bloomberg School of Public Health approved the trial. A local female researcher approached women who were six months into pregnancy for enrollment, to explain the procedures and obtain their oral consent.

Education also became a part of the research testing for those in the chlorhexidine trials. Parents in this group received educational messages about clean cord care.

The NNIPS enrolled 15,123 infants into the trials. Of these infants, 268 resulted in neonatal death. Of the surviving infants, researchers found that there is a 24 percent lower risk of mortality among the chlorhexidine group than those who use dry cord-care (no soap and water, chlorhexidine or any other liquid). Also, infant mortality in Nepal was reduced by 34 percent in those enrolled in the trial within the first 24 hours of their birth.

The trial data also provides evidence that cleansing the umbilical cord with chlorhexidine can lessen the risk of omphalitis and other infections. Omphalitis, a cord infection, was reduced by 75 percent when treated with chlorhexidine. The antiseptic was determined to have an overall positive and significant effect on the public health of the country.

In 2009, after results of the trials released, the USAID supported the Government of Nepal to pilot a chlorhexidine program. Saving Lives at Birth: a Grand Challenge for Development, an NGO, included chlorhexidine into routine care nationwide two years later. The Government of Nepal has advocated and promoted the usage of chlorhexidine by packaging the products as a maternal health product. They are now even educating health care workers on the application of the product.

What chlorhexidine does for Nepal goes beyond its borders. Nepal has also impacted countries such as Nigeria, Pakistan, the Democratic Republic of the Congo and Bangladesh. These countries are now using chlorhexidine to lower the infant mortality rate and create healthier societies.

Chlorhexidine is reducing infant mortality in Nepal and other countries. 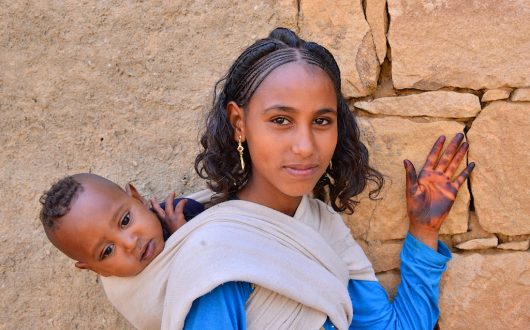 USAID is working with the Ethiopian government to reduce maternal, neonatal and child mortality rates, according to their website. Ethiopia has one of the highest rates of maternal deaths in the world.

“Women have a one-in-52 chance of dying from childbirth-related causes each year,” according to USAID. “Every year, more than 257,000 children under the age of five die and 120,000 die in the neonatal period. More than 60 percent of infant and 40 percent of under-five deaths in Ethiopia are neonatal deaths.”

This dire situation calls for extensive health care services. Ninety percent of Ethiopian women give birth in their homes in order to observe cultural traditions and be surrounded by company they trust. Health facilities can spread awareness about the value of institutional delivery in decreasing mother and child mortality rates; many mothers have never heard the benefits of skilled birth attendance and postnatal care.

Preventable complications like hemorrhage, infection, unsafe abortion, hypertensive disorders and obstructed labor are to blame for 80 percent of maternal deaths.

USAID has intervened in family, community and facility care by increasing accessibility of health services. A health extension program includes basic obstetric and newborn care, essential newborn care, management of neonatal and childhood illnesses, coverage of immunizations and the early identification and treatment of sick children, all of which go a long way to decreasing the child mortality rate.

Additionally, they funded the Integrated Family Health Project, an activity that seeks to promote and strengthen family planning and maternal, newborn and child health practices and services. With the cooperation of health programs throughout Ethiopia, the IFHP impacts about 40 percent of the country’s entire population.

The Health Ministry and various organizations provide health facilities with ambulances, equipment and skilled staff. The majority of communities in Ethiopia lay in rural regions that place women in a vulnerable position when a complication arises during childbirth, and many fatalities occur in the transfer to a health facility.

The Government of Germany recently contributed 10 million euro to UNICEF, bolstering its emergency response to drought affected regions in Ethiopia. This support will provide life-saving assistance to severely malnourished children and pregnant and lactating women. Lack of nutrition threatens close to half of a million children under the age of five and nearly 140,000 lactating women in the Somali area.

By providing preventive, promotional and basic curative health and nutrition services to mothers, infants and young children, USAID and other organizations like UNICEF are saving lives and combating illness and disability. 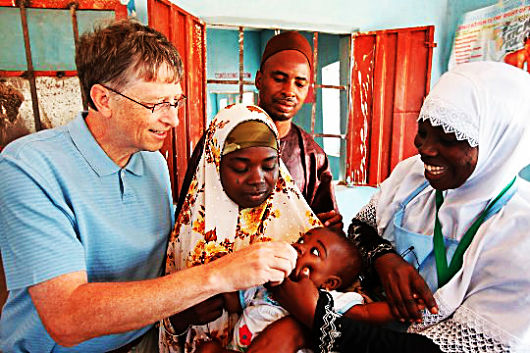 One out of every 20 children dies before the age of 5, and the Bill and Melinda Gates Foundation wants to know why.

That’s according to the foundation’s announcement in early June 2015 of a $75 million investment in a new program named the Child Health and Mortality Prevention Surveillance Network, or CHAMPS.

The network will utilize ground teams in Africa and Asia to gather information about recent childhood deaths. Teams will be positioned in key areas and will collect samples to be analyzed in advanced laboratories. In doing so, the foundation hopes to replace the current practice of conducting “verbal autopsies”—asking questions of parents following a child’s death—with something more comprehensive.

“The world needs better, more timely public health data not only to prepare for the next epidemic, but to save children’s lives now,” said Bill Gates, co-chair of the foundation, in announcing the investment.

As part of the new program, teams will utilize minimally invasive needle biopsies to take samples from certain deceased children after obtaining permission from parents. The samples will then be analyzed at labs throughout the world to determine the cause of death. Key partners in this effort will include the U.S. Centers for Disease Control and Prevention, as well as the Global Health Institute at Emory University.

While these teams will mostly be focused on monitoring childhood deaths, they will also be able to respond to global health crises, should the need arise. In an interview with The Atlantic, Gates stated the program would help detect epidemics sooner and deploy key resources faster. Gates believes this will improve upon the reaction time seen in the Ebola crisis.

The Ebola epidemic, still ongoing, is responsible for at least 26,000 reported cases and 11,000 deaths; the World Health Organization estimates many more cases have gone unreported. According to The New York Times, the WHO believes the first Ebola victim was a one-year-old boy. As the epidemic worsened, 12 weeks passed before the virus was properly diagnosed.

The new program may make a difference in some of the world’s poorest regions. High child mortality is a common symptom of poverty and is an indicator of poor access to medical services. It often causes overpopulation, as families are forced to consider that not all of their children will survive to adolescence.

The United Nations has made the reduction of childhood mortality a centerpiece of its development policy, naming it as one of the eight Millennium Development Goals. Since 1990, childhood mortality has been reduced by 50 percent. With new efforts and innovative technology, the Bill and Melinda Gates Foundation hopes to cut the rate in half once more. 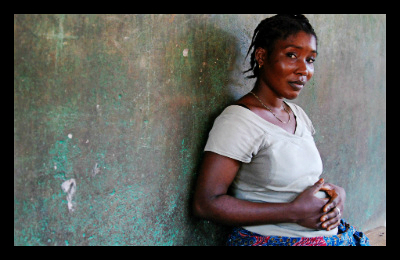 Sierra Leone, a small country on the West African coast, gained independence from Britain in 1961. Ranked as the least developed country in the world in 2007, poverty and maternal mortality are some of the main problems that Sierra Leone faces today.

As of 2010, Sierra Leone had a maternal mortality rate (MMR) of 857 per 100,000 live births, making it one of the most dangerous countries in the world for women to give birth. This high maternal mortality rate was mainly due to hemorrhages, a cause of 26 percent of maternal deaths in sub-Saharan Africa. Since Sierra Leone only collects annually one-forth of the blood it needs for transfusions, hemorrhages are a major danger during childbirth. Other contributors to the high MMR are obstructed labor, anemia and toxemia during pregnancy.

Approximately 73 percent of births in Sierra Leone occur in rural areas, where access to health care during pregnancy is normally limited and maternal healthcare does not have as many beneficial outcomes compared to healthcare in urban areas. Many women who need cesarean sections do not receive them, due to the fact that even if a birth attendant is present, many birth attendants are actually aides who do not have the qualifications to perform a cesarean section or to do other tasks that are necessary to help the mothers survive.

Maternal mortality is also prevalent because of a lack of sanitation. Traditional practices also play a cause, since many communities choose home-births instead of modern health care facilities.

Another cause of maternal mortality in Sierra Leone is the high rate of adolescent marriages. Forty-four percent of girls in Sierra Leone marry before they reach the age of 18. Adolescents are more likely to suffer during pregnancy and childbirth, as their bodies are normally not developed enough to carry a baby and deliver safely.

Contraceptive use is also not widespread in Sierra Leone, contributing to Sierra Leone’s high MMR. Only about 7 percent of women use contraceptives, leading to a high fertility rate of 5 children per woman. This contributes to more children and more pregnancy related complications.

In 2010, in order to reduce the MMR and the high rate of children’s deaths in Sierra Leone—almost one-third of children died before they reached their fifth birthday as of 2007—the government of Sierra Leone implemented a policy that would provide free healthcare for pregnant and lactating women and for children under the age of five. This policy led to increased amounts of antenatal care visits immediately after it was introduced, but antenatal care visits decreased once again a few months later, and the policy was not as impactful as hoped.

Therefore, despite the 2010 healthcare act, Sierra Leone is still facing high rates of maternal mortality and a high rate of deaths among children under 5. However, there is hope. Thanks to a now thriving mining industry and a GDP that is growing, Sierra Leone’s economy is looking up. Hopefully, these economic benefits can be invested in the healthcare industry and can help contribute to the supplies and care that pregnant women and their children need.