In what’s being hailed as a huge human rights victory the Indian Supreme Court has passed a ruling recognizing transgender people as a third gender.

The ruling upholds that “it is the right of every human being to choose their gender” and recognizes the importance of self-identification.

Justice KS Radhakrishnan, who headed the two-judge Supreme Court bench said in his ruling, “Recognition of transgenders as a third gender is not a social or medical issue but a human rights issue” and that “gender identity is integral to the dignity of an individual and is at the core of personal autonomy and self determination.”

The support for transgender rights came after a plea was filed before the Supreme Court on behalf of transsexual and transgender (or “hijra”) communities in 2012.

While there are approximately two million transgender people in India, a majority of them are ostracized and have a difficult time making a living.

There is a great deal of discrimination against the hijra community, making it difficult for members to access education, jobs and in some cases basic healthcare.

The ruling also recognizes the transgender community as a marginalized community, making it so that the government must provide quotas for jobs and education for transgenders to help them rise out of poverty, as they do for other disadvantaged minorities.

One major facet of this ruling is that people will be able to self-identify their gender without submitting medical evidence, meaning that proof of sex reassignment surgery is not necessary to be recognized as male, female or third gender.

This advance in transgender rights comes after the progressive 2009 allowance by India’s Election Commission for transgenders to choose a gender other than male or female on voting ballots.

Unfortunately, while this ruling is a huge advance for transgender rights, it also brings to light continued concerns for the LGBT community.

Following this ruling supporting transgender rights many people who support the LGBT community hope that this step in the right direction will lead to the repeal of this ban, and further rights for LGBT individuals regardless of sexuality or gender. 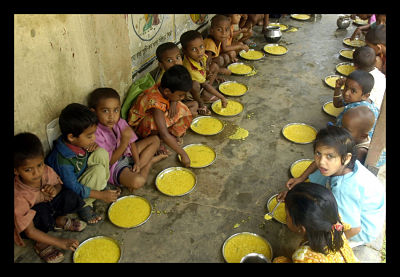 In 2001, the Indian Supreme Court mandated the implementation of a mid-day school lunch program with the explicit goal of feeding 120 million Indian children daily. For years, this program has been credited with increasing school attendance throughout India, as well as serving as a boon to a large malnourished population. This school lunch program has come under considerable scrutiny when, in a single day, two separate schools shut down with ill children-25 of which have died this past week. While politicians dodge accusations of corruption, many have made it clear that without adequate regulation, this program faces an uncertain future.

It may come as a surprise to many, but India has had a long culture of ensuring food for their young. Dating back to 1925, the Mid-Day Meal Program has grown from providing food to disadvantaged children of the Madras Municipal Corporation to feeding 120 million across the country.

The benefits of such a program are multi-faceted. On one hand, the program serves as an incentive for children to attend school and become educated. Where students don’t have adequate nutrition, lethargy makes learning near impossible. Through strict nutritional requirements, the program aimed to curb this issue. On the other, the program gives young children the nutrition necessary for healthy mental and physical development.

Without any doubt, India’s recent economic growth has been impressive. Yet, despite the countries bourgeoning transformation into a powerful player, certain growth indicators remain stunted. With the United Nations Children’s Fund has reported that India boasts one third of the words undernourished children, programs such as the Mid-Day lunch program are crucial to further development.

With the events of the passed week, this program is under fire. In a matter of hours, 25 children from the Bihar state went from a health, happy disposition to vomiting, diarrhea, and death. Concurrently, in a nearby Bihar district, 60 children were hospitalized after exhibiting traits food poisoning.

After cursory investigation, the culprit was found to be cooking oil stored in a used insecticide container. With this revelation, charges of corruption levels of deregulation have been levied against all levels of government. Saurabh Sharma, a representative of New Delhi non-profit JOSH, has stated that “the government has no monitoring system about the quality of food”, he continues “the school principal will blame the private contractor who will blame the government for paying as little as four rupees [6 cents] per meal.”

With an incensed citizenry, many feel the program, or at least the breadth of the program will suffer unless adequate regulation is implemented. Without any doubt, such a program is absolutely necessary and absolutely zero patience should be afforded to government corruption. India’s future depends on it.