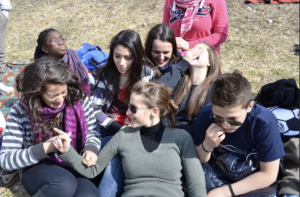 Yemen’s humanitarian crisis is routinely categorized as the worst humanitarian crisis in the world. Over the last five years, from when the Yemeni Civil War launched the emergency, children have been hit the hardest. Tens of thousands of children have died, not only from the conflict but also due to preventable diseases and malnutrition. UNICEF estimates that about 80% of Yemen’s population is in desperate need of humanitarian aid. Because children are among the most affected by the crisis, four out of every five children (about 12.3 million) require help. TikTok activism, spearheaded by millennials and Gen Z, has been instrumental in bringing awareness to this pressing issue.

Though this crisis certainly isn’t new, its importance has become increasingly relevant on social media, and perhaps just in time. With the outbreak of the coronavirus, Yemen is facing a twofold crisis. There is a short supply of clean water, sanitation, and necessary protective equipment. Not only are many healthcare facilities closed or out of operation, but many health workers aren’t being paid. If there was a greater time to bring to light the severity of what’s going on in Yemen, it appears to be now.

With 90 percent of people aged 18-29 using at least one social media site, Millennials and Gen Z rule the internet. Different social media apps have evolved to have a specific brand of content. For example, Instagram is a place for aesthetically and visually pleasing pictures. TikTok became famous for dance trends and short, funny videos. Twitter is known for its 480 character-long quippy remarks.

In recent months, young adults and teens have used apps like Twitter, TikTok, and Instagram for more than status updates. Instead, they’ve cleverly utilized the apps’ algorithms to spread the word of issues that are important to them, one of which is the crisis in Yemen. According to research done by Pew Research Center, 44 percent of people aged 18-29 “encouraged others to take action on issues that are important to them.” This is exemplified in the way these young adults are advocating and rallying to end the humanitarian crisis in Yemen.

User @_mennabarakaa is an example of TikTok activism. She posted a video to her TikTok account performing dance moves that have become nearly synonymous with the app. In front of the dance moves, she posted facts about the crisis in Yemen and encouraged followers to donate. The video was viewed over 141,000 times and has received around 25,000 likes.

This is not the first TikTok on the subject that has gone viral. Another, posted by Jinan, known as @jinanchwdhury on TikTok, started off a “hair reveal,” teasing users by pretending to take off her hijab. Instead, she cut to photos and facts about Yemen. Both videos were 60 seconds or less.

Jinan, who currently has 53.3K followers on TikTok, started using her account for activism because she felt stuck offline.

“I initially posted content on the Yemen crisis because I wished to help however I could,” she wrote via Instagram direct messages. Since she was a teenager, she felt there wasn’t much she could do. “I tried to sign as many petitions as I could, and I thought that using my voice and raising awareness is a crucial way for me to do my part.”

TikTok has been essential in how she’s advocated for other teenagers to do what they can to help the Yemen crisis. She reposts content she finds helpful on Twitter and Instagram, and her TikTok is where she puts content into her own words.

TikTok’s algorithm, which is based partly on how an individual user interacts with content, also pushes videos with certain hashtags. This is good news for TikTok activism creators like Jinan. If their videos end up on a user’s page because the poster utilized popular hashtags (like Jinan did in her hijab video), the user may interact with that video. As a result, they’re more likely to see similar TikToks. This algorithm is something that Jinan has used to her advantage.

She believes the app’s algorithm makes it easier for her content to get seen. “The reason why I started activism on TikTok was to maximize the amount of people I could reach and raise awareness to.” And it works — her videos consistently rake in thousands of view. Jinan’s video on the Yemen crisis received over 440 thousand views.

“I’m so grateful that [the Yemen video] reached hundreds of thousands of people,” Jinan wrote. “I feel as though I did as much as I could by raising awareness to so many people.”

This new wave of social media activism isn’t limited to TikTok. Journalist Mary Retta claims “the Instagram Article” has used aesthetics to their advantage and spread activist content to users who otherwise wouldn’t engage in it. Accounts like @soyouwanttotalkabout and @impact package information through short, 7-to-10-page slideshows that feature fun colors and fonts. This beautification of the news, while different from a typical article, is effective in its goal. The accounts have 1.2 million and 455 thousand followers, respectively, and are just two of many similar pages. Instagram is also a completely free app. Information on global health crises is not locked behind a paywall like it is for other mainstream news services.

We must not turn away from what is happening right now in Yemen.

This social media revolution of sorts is a huge development in the involvement of young adults and teenagers for issues such as global poverty. By crafting content catered to be successful on specific apps, more and more young adults are not only raising awareness for these issues but also encouraging others to do what they can.