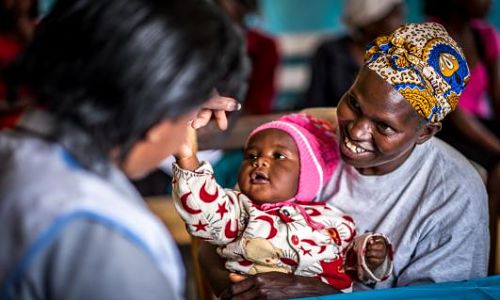 New data has been able to reveal that global health investments have been able to save 34 million children since 2000. Several of these international collaborations have decreased child mortality rates in half for those under the age of 5 in several countries.

Countries within the United Nations pledged to provide aid in order to reduce mortality rates in children under the age of 5. The goal was to have a two-thirds reduction by 2015.

In June 2015, the United Nations declared that its goal had been reached in several countries but much could still be done to improve child mortality rates in other regions.

The IHME at the University of Washington and the U.N. reached out to medicinal agencies and non-governmental organizations that were given the child mortality reduction task. International collaborations with scientists allowed both organizations to create a scorecard that kept track of foreign aid and the progress made in different regions of the world.

This scorecard will continue to be used to further promote investments in children’s global health and as a way for people around the world to hold the regions receiving the aid accountable.

For now, the scorecard is being used to reveal how much direct impact foreign aid can have on global health for children. The statistics showed that only US$4,205 is needed to keep a child healthy from birth until 5 years of age.

Meanwhile, private and public donors contributed US$73.6 billion and saved 14 million young lives. The majority of the donors were from low- and middle-income countries according to the data.

In comparison, the United States was able to save 3.3 million children by using only one-third of its less than 1 percent foreign aid budget plan.

Much of the aid went to providing vaccines, HIV/AIDs testing, sanitation and nutrition. Although much has been accomplished, the United States Agency for International Aid (USAID) has stated that the United States has the ability to do much more for young children.

According to the USAID’s 5th Birthday Campaign, 6.6 million children will die this year before their fifth birthday. The campaign states that that is nearly 18,000 children dying per day – most of them dying from preventable causes.

Through the 5th Birthday Campaign the U.S. will continue investing in family parenting, vaccines, sanitation and nutrition to help more children live beyond their fifth birthday.

Internationally, the United States has agreed to work with other countries in funding the Global Financing Facility. A post-2015 organization that will work toward further reaching the United Nations Secretary-General’s Global Strategy for Women’s, Children’s and Adolescents’ Health and the Sustainable Development Goals.

The work of journalists covering science in developing countries is largely about the development of aid-related programs. Most of the time, journalists report on the establishment of research centers and the implementation of science-related projects sponsored by private donors and/or non-profit international organizations.

As explained by Carl-Gustav Lindén, a freelance communications specialist, journalists are usually covering the implementation of new aid programs—or the scandals involved. However, one of the most challenging tasks is to report on issues such as the real impact of foreign aid. “Where does it go? Does it achieve what it set out to? And does it make a tangible difference to the lives of local people?”

Lindén suggests that there are ways for foreign aid reporters to support science and, at the same time, provide more accurate information about the impact of aid. Development aid can be a complex subject to report, especially due to the number of moving pieces involved. Often these are political, such as the role of donor nations and recipient countries or the fact that the bulk of foreign aid comes from taxpayers’ money. Aid can also come from private organizations with specific agendas, such as religious groups or NGOs that work towards supporting democracy promotion.

One of the primary focuses of science-related projects is to build capacity in poor countries and to incentivize economic growth, job expansion and welfare. Beside the typical laboratory research and development setting, many “aid for science” projects involve educational programs that promote learning and knowledge exchange.

When it comes to the topic of the effectiveness of foreign aid, there is no shortage of heated debates. However, science-related programs get the least amount of attention from journalists and editors, who often shift focus toward the stories that contain scandals about the corruption or inefficiency of foreign aid.

In devising how to best report on the outcomes of foreign aid, Lindén suggests that it is useful to stay away from “yes or no” answers, especially when it comes to science development. As such, it is more productive to report on the specific plans and developments within a project, rather than generalized outcomes.

Moreover, other reporting strategies could target the benefits of new donors’ involvement in specific knowledge development projects. This would also involve investigating whether there are other reasons driving funding, beside pure altruism.

While journalists often sell stories by focusing on the bad and ugly within foreign aid or on the excitement of a new project, it is necessary for them to remain committed to reporting knowledge driven initiatives and the slow moving advances generated through foreign aid, as well.