Tag Archive for: Immunization in Sudan 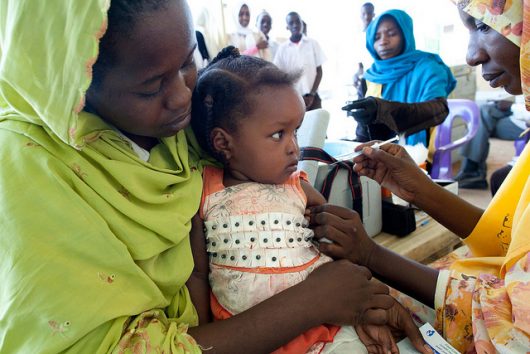 For the past few years, Sudan has been in the middle of one of the worst measles outbreaks in their country’s history. With 1,730 confirmed cases and over 3,000 suspected cases, measles is spreading like wildfire. This has brought to light the desperate need for a proper system for immunization in Sudan, especially for diseases like measles.

Measles is a highly infectious disease that spreads very quickly, but can be easily prevented by vaccine.

After the introduction of the measles vaccine, there was an 84 percent drop in measles deaths between 2000 and 2016 worldwide. It is estimated that the vaccine prevented 20.4 million measles-related deaths during this time period. This statistic delineates the power of the vaccination and the positive effects it can bring to a country like Sudan.

With support from UNICEF, the Ministry of Health launched a country-wide campaign to vaccinate almost 8 million children for measles.

Children living in poverty are particularly susceptible to catching measles as they are often malnourished. Additionally, children living in conflict zones are difficult to reach in order to immunize. As a result of such conditions, UNICEF has been tirelessly fighting to get humanitarian access to these areas.

Non-governmental organizations (NGOs) have also come to the forefront in the fight against measles. GOAL Global, a nonprofit that focuses on international aid for those in poverty, launched its own campaign for immunization in Sudan. Within the first 7 days, they vaccinated over 20,000 children.

GOAL Global worked in partnership with other major groups like the International Organization for Migration (IOM) to get this campaign off the ground. Thanks to groups such as these, children that would otherwise lack access to healthcare are able to stay safe in the face of the measles epidemic.

Campaigns for immunization in Sudan are not as simple as just bringing the vaccine out to children. They require extensive planning and mapping out of areas, in addition to training healthcare workers to administer the vaccine.

Meningitis is another disease that Sudan struggles with. Meningitis affects the spinal cord and brain and in some cases can be life-threatening. Sudan accounts for 15 percent of meningitis cases in the “meningitis belt,” which is a stretch of countries heavily affected by the meningitis infection.

In recent years, WHO in partnership with the Ministry of Health and UNICEF have launched an immunization campaign for meningitis with the goal to vaccinate 720,000 children in Sudan. Campaigns such as these require upkeep in order to keep the outbreak at bay and prevent the return of the disease.

Vaccines are also an inexpensive, high-impact solution to disease. The introduction of immunization campaigns to Sudan has the potential to stop the measles epidemic and the meningitis problem dead in their tracks.

Vaccinations are a big step towards evening the playing field for children living in poverty compared to children from more affluent communities. Immunization in Sudan for diseases like the measles and meningitis give all children across the board a better chance at life.