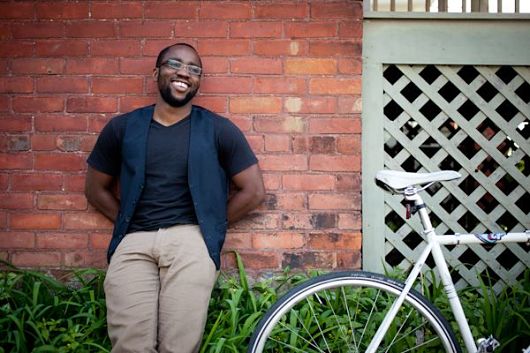 Tunde Wey is on a mission to “unfetter diners from the tedium of modern American cuisine.” The Nigerian-born chef came to the United States at age 16 with plans to become a doctor. But, after living in Detroit for 15 years, he finally realized that what he really wanted to do was cook.

Geographically just about the size of Texas, Nigeria’s population totals at about 150 million people. Since the country is the most populous in Africa, Wey always felt perplexed as to why food from his homeland was not more obtainable in the United States.

After co-founding a restaurant in Detroit, the Nigerian immigrant began his own “pop-up” restaurant. He aimed to explore America, as well as to introduce people to the food he grew up with. The name of his business, Lagos, is the name of his hometown in Nigeria.

With Greyhound busses as his primary mode of transportation, Wey impressed diners in New Orleans, Chicago and Buffalo and then headed for the East Coast. He would rent out different spaces, sometimes a restaurant and other times communal kitchens, and make his crowd a delicious feast. After continued success, his one-night, one-man restaurant started selling out.

Each night, the chef brought along with him a bag filled with cooking supplies such as alligator pepper seeds, calabash nutmeg and uda, which is a kind of pepper. Wey likened it to a doctor’s medicine bag. He had no formal training and mostly went by what he observed in his childhood kitchen.

“I learned how to cook from watching my parents, my aunt, a lot of YouTube videos… The benefit that I have is that I grew up with this food, so I know exactly what it’s supposed to taste like,” he said.

In fact, as he gained footing in his own kitchen, Wey became more and more aware of how much he missed his family, who he had not seen in over seven years. It is rare, but in some instances, children are sent over to the United States on their own and then later sponsor family members to emigrate and join them. Charitable groups and advocacy organizations help with this process.

Wey was getting major attention from top-notch chefs and was asked to go to Los Angeles to cook with celebrity chef Roy Choi in February 2015. But, his trip came to screeching halt when a team of border patrol agents stopped his Greyhound bus near El Paso, Texas. They discovered that his Nigerian passport had long expired.

It was back in 2007 when he allowed his student visa to expire. Wey said, “I just thought: I’ll fix this. I’m going to go back to school, finish and adjust my status somehow. And so it was something I kept putting off.” Nearly 50% of all illegal immigrants are in the same predicament. They let their visas expire and fail to renew them.

Wey spent a few months detained in El Paso and felt as though all of his success in America had hit a wall. Fortunately for him, he had a clean record and many friends and family members who managed to raise $6,000 to bail him out and keep him from being deported.

The backup in immigration court means that Wey’s appointment is not until 2017. A judge will then determine his fate: whether he can stay or whether he must say goodbye to all of his dreams and go back to Nigeria. Until then, he plans to keep cooking and has achieved a prime spot for a new restaurant in New Orleans’ St. Roch Market.

Wey is one of 11 million undocumented immigrants currently living in the United States, according to the U.S. Center for Immigration Studies. The Pew Research Center reported in 2014 that illegal immigrants make up 5.1 percent of the U.S. labor force.