Tag Archive for: IF campaign 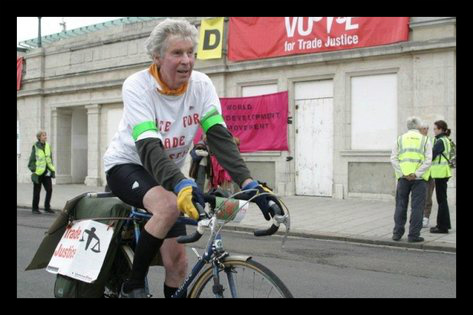 Age is but a number for Colin Brannen, a 76-year old from London who plans to ride his bike from Newcastle-Upon-Tyne to London and back to raise awareness to end global hunger. The former teacher does not own a car and will take time along his route to stop and talk to people about global hunger and the IF Campaign.  This campaign tackles the idea that the world makes enough food for everyone, and yet not everyone has enough food.

Brannen’s goal is to get to London to take part in the IF campaign’s rally in Hyde Park on June 8.  The rally and campaign is being supported by Christian Aid and over 200 different development organizations.  Brannen has been a Christian Aid organizer for over 30 years.  Throughout his ride he will discuss with people what Christian Aid is doing to support the IF campaign.

According to Brannen, campaigning is increasingly important in current times.  Poverty reduction is not all about raising money, although that is important, it is equally about raising awareness and inspiring action.  Brannan hopes to bring change and encourage the government to be more supportive of the fight against poverty.

As an avid cyclist, Brannen has cycled to raise awareness for social and justice issues throughout his life.  In 1998, he cycled to Birmingham for the G8 conference and part of the way to Cologne, Germany in 1999 for another G8 rally. In 2004, he cycled to Brighton for a trade justice event.  Christian Aid is asking people to show their support for ending global hunger by attending the rally.  In a world where we produce enough food for everyone, it is inexcusable that one in eight people still go hungry.

The IF campaign is calling for G8 leaders to take action at the meeting in Northern Ireland later in June and continue to fight hunger.  For more details go to the Christian Aid website at www.christianaid.org.uk/if. On May 15th, hundreds of religious leaders from 170 difference spiritual organizations will unite in combating the issue of global hunger by lobbying parliament. The Catholic Agency For Overseas Development (CAFOD) has organized the mass lobby on behalf of the “Enough Food for Everyone IF” campaign. This campaign has a strong message encompassed by four IFs.

Enough food for everyone…

IF governments keep their promises on aid, invest to stop children dying from malnutrition and help the poorest people feed themselves through investment in small farmers.
IF governments stop big companies dodging tax in poor countries, so that millions of people can free themselves from hunger.

IF we stop poor farmers being forced off their land, and use the available agricultural land to grow food for people, not biofuels for cars.
IF we force governments and investors to be honest and open about the deals they make in the poorest countries that stop people getting enough food.

These hundreds of monks, nuns, priests, and others will meet with members of Congress to discuss the reasons behind world hunger and ways to end the epidemic. Many of these religious leaders have first hand experience in third world countries working with people suffering from hunger and malnutrition.

One of the campaign’s organizers, Sister Pat Robb CJ, plans to inform members of Congress about her time in developing countries where she witnessed children dying from lack of food. She also hopes that the large scale of this lobby will put pressure on Congress to not merely listen, but to take action against world hunger.

Other groups that support the IF campaign are JPIC Links (Justice Peace and Integrity of Creation), the Africa Europe Faith and Justice Network (AEFJN), the Conference of Religious (COR), Progressio, Trocaire, Church Action on Poverty and SCIAF.

Archbishop Desmond Tutu hopes that this anti-hunger movement will be as successful as the anti-Apartheid campaign that happened several decades ago. He is confident that if people can unite over the issue of hunger, then the campaign will be a victory. One of the ways to reach this goal, he says, is for wealthy countries to commit to invest 0.7 percent of their gross national incomes in foreign aid. However, it is also important to change the systems that created extreme poverty in the first place.

These religious leaders are hoping that their influence will sway the minds of politicians to support foreign aid legislation. In the words of Sister Pat Robb, “As long as one person is still hungry, our work is not over.”