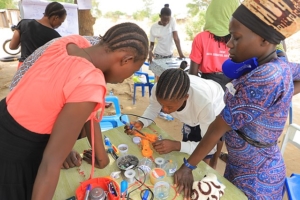 One of the world’s least developed countries is about to get a substantial technological upgrade. Following an agreement between Niger’s Agency for Information Society (ANSI) and the International Crops Research Institute for the Semi-Arid Tropics (ICRISAT), the development of an innovation and technology center has begun in the village of Sadore. That center will have technical educational opportunities as well as advanced technology and equipment.

The Location of the New Center

Sadore is located in the country of Niger. Niger is an African nation that is on the border of numerous other countries. It boasts a population of more than 24 million people and has a river that runs through its capital, Niamey. Niger is also among the hottest countries in the world, earning it the nickname, the “Frying Pan of the World.”

The Human Development Index (HDI) measures how developed a country is. It considers various factors such as income, life expectancy and education. According to this index, Niger ranked as the least developed country in the world. In 2019, Niger received an HDI of .394, lower than any other country.

Aside from its lack of development, Niger faces other problems as well. Niger currently has a poverty rate of 44% and malnutrition plagues much of the country. Making matters worse is the fact that the fertility rate in Niger is the highest in the world and easily surpasses its death rate. This means that the population is constantly growing, which will lead to more people living in poverty.

The Agreement Between ANSI and ICRISAT

ANSI and ICRISAT agreed upon the decision to develop the new center. ANSI primarily focuses on sustainable digital development in Niger. This spreads to various aspects of society such as education, health and agriculture. The agency also prioritizes digital technology and how the advancement of this technology can have a positive impact on the country.

While ANSI is broader in its areas of focus for development, ICRISAT has more of a focus on rural areas and agriculture. ICRISAT is a nonprofit that uses scientific research to improve the lives of people living in rural communities. It helps farmers grow various types of crops so that they can sustain themselves and their families.

A partnership between these two has the potential to be extremely beneficial for Niger. More specifically, a collaboration to further develop food production could help alleviate Niger’s malnutrition problem. Additionally, as the creation of a new innovation center proved, agricultural technology can also take a step forward and help the country along in its development.

The creation of a new innovation and technology center comes as a part of the Niger 2.0 Smart Village Project. Niger 2.0 is a program that plans to transform Niger’s rural and lower-income areas into far more digitally advanced communities. This will improve the lives of the people living in these areas as well as create more sustainable infrastructure.

The center will undergo development in various “clusters” that focus on specific aspects of society such as health, education and agriculture. It will also provide many educational opportunities for the public to use such as a coding academy and a university for several technical careers.

Furthermore, the center will also hold a wide variety of technological resources that many of Sadore’s citizens will likely be experiencing for the first time. These include “a national data center…assembly lines…computers, tablets and solar panels.”

How This New Center Will Affect Niger

Ibrahima Guimba-Saidou, director general of ANSI, has expressed his support for the development of a new innovation and technology city in Niger. He believes that it could be the key to solving many of Niger’s largest problems. He specifically spoke about how technology could help improve agriculture. For example, drones could help collect data about certain crops.

The center should also improve the state of business in Niger as it will have facilities that support small enterprises and start-ups. Saidou believes that the growth of these businesses could lead to substantial progress in agricultural development that could help improve Niger’s malnutrition situation. With the implementation of the new center and an increase in technological advancements, the world could soon be looking at a brand new Niger.