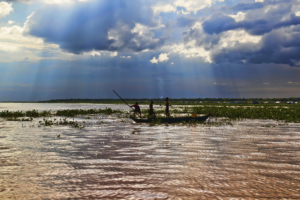 A once thriving area for fishing and agriculture, the Mekong River Delta sports a dramatically different look than it did just a century ago. The river, historically wide and abundant, is characterized by large jigsaw puzzles of cracked earth where water has dried up and emptied villages where fishermen once thrived. The place has recently seen a mass exodus, with a million people resettling from southwestern Vietnam alone in the last decade.

The region has long been one of the world’s largest inland fisheries, supporting 60 million Cambodians, Vietnamese, Thai and Laotians. It provides Vietnam with 50 percent of its food and 23 percent of its GDP, and Cambodia with 80 percent of its protein intake and 12 percent of its GDP. However, over the last couple of decades, hydropower dams have emerged along the river, threatening local communities and ecosystems while creating large amounts of renewable energy.

According to a UNESCO report, dams on the upper Mekong have resulted in a 70 percent reduction in sediment in the delta. By 2040, estimates determine that these and future dams will block 97 percent of the sediment that moves down the river. This sediment is critical for both rice production and fish life in the Mekong. The loss has been devastating.

Hydropower Dams are Detrimental to the Environment

Even with the detriment to rice production and fishing in the area, the lower Mekong region may still see more hydropower dams. Several countries have created plans to use the area for power, and not without reason. Estimates have determined that dams in the region should be able to produce 30,000 megawatts of electricity, which would be a massive boost to the power capacity of the lower Mekong.

Dams are also an opportunity for foreign investment and could be a huge boost to the GDP of these countries. In fact, the Mekong River Commission’s initial studies estimated that countries in the region could gain $30 billion from dam development, though more recent studies suggest that the area could lose as much as $7 billion from this construction. Despite this, the Mekong River Commission has advised a postponement on the building of these dams until it can further evaluate the risks, and because of the inequitable effects of building the dams, which would likely benefit urban elites while hurting rural farmers and fishermen.

Are there Positive Effects?

Some argue that the presence of these dams may have positive effects on fishing and rice production in the area due to an increased flow of water during dry seasons as dams release water, combatting the effects of drought. Whether this makes up for the loss of nutrient-rich silt and fish life is debatable. However, farmers have recently resorted to using chemical fertilizers and pesticides, which can be potentially harmful in the long-run, to boost their crop production.

Though it is unclear whether or not countries in the Lower Mekong Region will continue their plans to build hydropower dams, it is certain that farmers and fishermen will continue to suffer as long as the delta is victim to the already present dams in China and the effects of climate change. However, on a lighter note, there has been a recent increase in international aid and development to the Lower Mekong Region, as well as an effort to maintain biodiversity and create sanctuaries for fish and new fish reserves. Hopefully, these countries will manage to balance the poverty-alleviating industrialization that comes with hydropower, and a shift to industrialized agriculture with the interests of rural farmers, fishermen and biodiversity in the region in mind.