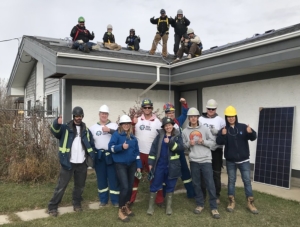 Renewable energy currently amounts to around 18.9% of Canada’s energy supply and more than half of its electricity generation. Nonrenewable sources of energy like natural gas and petroleum make up a majority, at 35.7% and 38.7% respectively, but private and public organizations are working to shrink the disparity. Renewable energy in Canada primarily comes from hydropower plants the country has established on its vast system of rivers. Quebec generates the most renewable energy of any province — 40,000 MW on hydropower alone, according to the Government of Canada.

How Renewable Energy in Canada Can Make Energy More Affordable

Renewable energy is the cheapest form of energy available. It is cheaper to build infrastructure for and generate power than nonrenewable sources. This remains true even without the government-provided subsidies that companies which businesses in the nonrenewable energy industry typically receive.

In recent years, Canada has committed to subsidizing renewables after signing the Paris Agreement, which set a goal for countries around the world to eventually become carbon neutral.

Currently, energy in Canada is the most expensive in the provinces and territories that are the most impoverished. Nunavut has the second priciest electricity — costing $0,37.5 per kilowatt in 2021. No official reports on poverty exist for Nunavut, but the Canadian government concluded that the residents of Nunavut live in some of the poorest conditions and 37% of households there struggled with food insecurity.

Nunavut is largely made up of scattered, remote and scarcely populated communities. This combined with difficult geography makes it challenging to build centralized energy infrastructure. Thus, most people living in Nunavut rely on expensive diesel power generators and burning fuel oil to power and heat their homes.

Renewable energy has shown some promise in Nunavut. Hydropower provides a third of the energy available in the territory. On average, hydropower costs around $0.80 per kilowatt, which is nearly five times less expensive than the average energy bill.

Currently, most people in Nunavut are not able to take advantage of cheaper renewable options because there are no regional or territorial energy grids in the territory. Still, indigenous groups are fighting to bring renewable energy to their communities and make energy more affordable.

The Economic Advantages of Expanding Renewable Energy in Canada

The focus on renewable energy in Canada also opens new opportunities for Canadian businesses to grow and expand in international trade.

Due to historical success and $200 million from the government, businesses are constantly emerging in the Canadian renewable energy sector. One such company is the Ontario-based NRStor Inc., which builds energy storage devices for renewables. The company has most notably worked on the Oneida Energy Storage Project, alongside the Six Nations of the Grand River. The project could save Canadians $760 million and be the largest battery energy storage facility in Canada.

The Canadian government reports that Indigenous Canadians are more likely to live in poverty than other groups in the country. This project will create internship, training and employment opportunities for Canada’s indigenous community, according to Six Nations Future.

The exporting of renewable energy internationally is an important source of profit for many of these companies. In 2014, renewable energy companies made $13 billion. Currently, clean fuels like ethanol and biodiesel are the most profitable products. However, there is variety among the hundreds of companies within the Canadian renewable energy industry. As these businesses succeed, they create new jobs and those in poverty can find work.

The Political Advantages of Expanding Renewable Energy in Canada

The expanding renewable energy sector strengthens international relationships between Canada and other countries through the importing and exporting of resources and devices needed to build renewable energy plants.

Recently, the Canadian Government announced hopes to export hydrogen to Germany to help replace Russian oil considering tensions caused by the conflict in Ukraine. The government wants to decrease Russia’s influence on Western Europe and push the international community to further embrace renewables.

The U.S. sees Canada as a major export opportunity for its machining industry because renewable energy plants require many different pieces of machinery to work. Trade between the U.S. and Canada within the renewable energy sector has already led to a memorandum of understanding that removed tariffs on solar technology, establishing the groundwork for future trade deals and partnerships.

Ultimately, renewable energy in Canada could be a key component in the country’s fight against poverty going forward, providing a new avenue for safety, opportunity and security to the country’s most vulnerable citizens.