“Energy poverty” is a term that describes the lack of reliable, affordable sources of energy. More than one-seventh of the world’s population still lacks electricity, and in countries where it is available, it is often very expensive or unreliable. Access to energy is essential to people’s health and wellbeing, and it is instrumental in reducing poverty. Countries will not be able to engage in economic activities without modern, efficient energy. This in turn slows economic growth, which is a necessity for countries to pull themselves out of poverty. The poor will remain outcast and unprosperous, shut out from the high technology world if energy poverty persists. Here is some information about renewable energy and the Swiss startup Energy Vault that is providing low-cost energy to developing countries.

Renewable energy has the potential to help the developing countries that are struggling to provide power. It is sustainable and efficient, and the more efficient the energy technologies are, the more energy a country can save to use elsewhere. Renewable energy may seem like the perfect solution to energy poverty. In practice, however, the familiar forms of renewable energy like wind and hydropower pose various challenges.

Barriers to Renewable Energy Use

First, renewable energy has a high initial cost. In order to harness renewable energy, countries must build specific structures to capture it and convert it into electrical power. If using hydropower, a country must build a hydropower plant; in the case of wind energy, a country must build wind turbines. Furthermore, energy generation is dependent on the climate and geography of the area and it may be unstable. Wind does not blow incessantly, and the turbines will not generate any energy when there is no breeze.

In the example of hydropower, areas may not have water to spare to power hydroelectric plants. More than 40% of the world’s people still do not have access to clean water, and it would be unwise for countries to use the little they do have on hydropower when their own people are still struggling. While renewable energy seems like the best option for developing countries, it presents several challenges when implemented.

In response to this issue, Energy Vault, a Swiss startup, developed a method to provide reliable energy by utilizing the force of gravity. It operates by lifting composite bricks, then lowering them back to the ground. The brick has kinetic energy as it goes down, which the structure converts into electricity. It uses similar principles to hydropower but replaces the water with a system of bricks. This makes the system more implementable than hydropower since it does not divert water away from the population, who need it for drinking. Any area can implement Energy Vault easily because it does not depend on geographical or climatic factors. Unlike hydropower, wind power or solar power, it can generate electricity under any conditions. Energy Vault is extremely low cost and affordable to developing countries that need it.

In addition to its reliability, Energy Vault is sustainable. It can last for more than 30 years, and its performance will not degrade at all throughout its life. Recycled waste and landfill materials make up the bricks that Energy Vault uses, and as such, they are readily available anywhere.

The affordability and sustainability of Energy Vault make it a good energy source for struggling countries. Though energy poverty is still a major issue in many areas of the world, startups like Energy Vault offer innovative solutions to combat it.

This announcement comes on the heels of another successful agreement between Joule and the Cameroonian government: the building of a hydroelectric plant on the Katsina Ala river. This project alone is expected to raise the country’s capacity to generate power by 40 percent, an increase of 450 megawatts.

Cameroon has the second largest hydroelectric potential in Africa. While working to harness more of this potential, the government of Cameroon is looking toward complimentary sources of energy. Predicting dry spells and rain shortages during hot summer months, they have turned to solar power.

The new deal with Joule Africa, set to supply an additional 100 megawatts of power, marks a confidence in the nation’s growth that is sorely needed. For the time being, there is little information on the accessibility of electricity in Cameroon, but some reports estimate that less than 20 percent of the population has a reliable power source.

It is hoped that higher outputs of energy, in tandem with the building of energy grids and roads, will reach a greater number of Cameroonians, though for many, it is first and foremost a development strategy upon which hinges economic growth. President Paul Biya has expressed his desire for Cameroon to achieve emerging market status by 2035. One of the avenues to this end goal is the improvement of energy infrastructure, and indeed, Cameroon’s energy needs are expected to triple by 2020.

Joule Africa is now working with a partner-engineering firm, Bethel Industrievertretung, and the government to determine five sites suitable for solar power facilities in Cameroon. The project will increase Cameroon’s capacity to generate energy by 15 percent. It will be constructed in two phases; the first stage being completed in 2015, and the second by 2017. 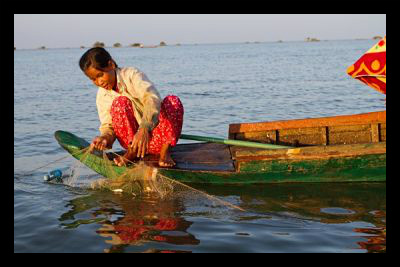 Cambodia is currently facing a dilemma whereby 80 percent of its population lacks reliable access to electricity. In order to address this problem, the country has begun to seriously consider hydroelectric power generated by dams. However, the improvement in Cambodia’s electricity situation may come at the cost of other, equally important resources.

A total of 42 dams are expected to be built along the Sekong, Srepok, and Sesan rivers in Cambodia, These three rivers are the most critical tributaries feeding into the Lower Mekong River, as they provide major routes for migrating fish and essential water and sediment flows to the downstream flood plains, including those that nourish the Tonle Sap Lake, one of the most productive inland fisheries on the planet.

The primary concern with the construction of the dams is that a significant portion of the fish migration into the Tonle Sap Lake will be wiped out and 90 percent of sediment flow will be blocked. This blockage would have a negative impact on the Tonle Sap Lake because the sediment flow delivers nutrients to the water body and maintains fertile soils for agriculture. These changes could potentially impact the health, livelihood and food security of more than 55,000 villagers from 16 ethnic groups that live along the path of the three rivers. Several million more people downstream could be affected as well due to their dependence on the freshwater system’s fish populations and agriculture.

A new film highlights the concerns stemming from the construction of the dams in Cambodia. The film, entitled, “Hydropower in Cambodia: Impacts and Alternatives,” highlights several changes that can be made to improve the current building plans for the dams.

Such changes could potentially include alternate placements of the dams and the design of sediment release mechanisms, both of which will help to minimize damage to the ecosystem. According to Dr. Tracy Farrell of Conservation International’s Greater Mekong program, the film “clearly and visually articulates the critical importance of this river system for its energy provision potential, as well as the fish migration, sediment and water flows that nourish critical ecosystems and feed Cambodia’s people.”