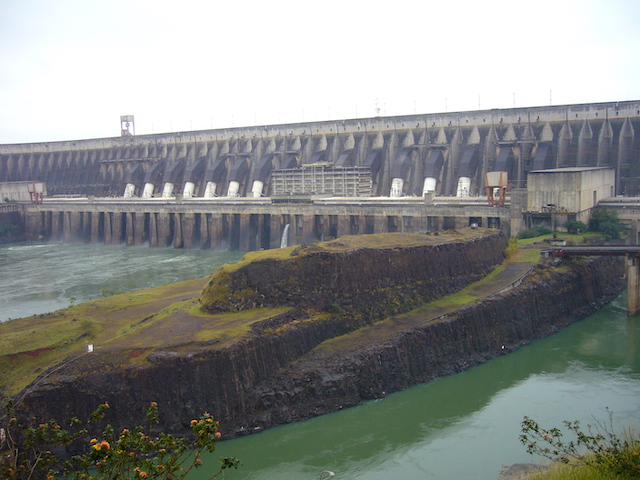 Paraguay uses massive amounts of hydroelectric power to produce much of its electricity. There are a few key reasons why Paraguay turned to hydroelectricity in the first place. One is that the country wanted to simply “increase domestic energy consumption”. Prior to this Paraguay was reliant on oil and diesel imports. Another reason Paraguay turned to hydroelectricity was out of an agreement that it made with Brazil in 1973. The result of this agreement was what became the Itaipu Dam, which was built on The Parana river.

The Itaipu Dam provides a large amount of hydroelectric power in Paraguay. In 2018, it produced 90.8% of the electricity for Paraguay. The Yacyreta Dam was also built for similar reasons. The dam was built in 1973 out of an agreement between Paraguay and Argentina to share the dam. The Parana River, where these dams are located, and the Paraguay River form what is called the Plata River basin, which runs along “Brazil, Bolivia, Paraguay, Argentina and Uruguay.”

Along with The Itaipu Dam and The Yacyreta Dam, Paraguay also has the Acaray Dam. All three of these dams contribute to providing hydroelectric power in Paraguay. Paraguay’s electricity is 100 percent produced from ample renewable resources within the country. In 2018, only 35% of the power production from hydroelectric resources was needed to meet the country’s domestic demand.

The Economy in Paraguay

The excess energy was then exported by Paraguay to other countries. Because of this excess supply of electricity, Paraguay is the fourth largest country to exports electricity. Of the country’s overall GDP, about 7.1 percent of it was attributed to electricity. The fact that Paraguay is able to meet its energy needs with hydropower and then use what electricity it has left over to sell to other countries is most beneficial to its economic situation. The three dams in the country also provide people with jobs.

Despite this abundance of hydroelectric power though, the domestic economy of the country still suffers system losses. The country is also strongly dependant on its agricultural sector, which can be unreliable depending on the weather. However, the situation is not entirely bleak. The Columbia Center on Sustainable Development has offered solutions to this problem. In the future, Paraguay can use its excess electricity to continue to diversify its economy. Doing so would also help in the further reduction of fossil fuel consumption. The country could also use past revenue streams to help predict the best way to maximize revenue in the future.

Hydroelectric power in Paraguay might not be seeing extreme economic gains yet. However, it is providing the country with a sustainable energy source. With the suggestions made by the Columbia Center on Sustainable Development, it is possible that it could improve even further in the future.