Tag Archive for: Hunger in Zambia 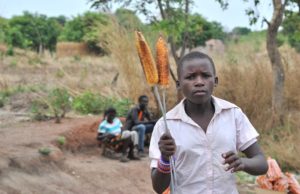 Due to climate change and unusual weather patterns, Zambia is experiencing a record-breaking drought, resulting in increased hunger in Zambia. Zambia, which is located in South-Central Africa, has one of the highest malnutrition rates in the world. Only 52 percent of Zambians eat the minimum amount of calories daily.

In 2019, Zambia had the lowest rainfall in the southern and western regions since 1981. This drought, which continues today, left 2.3 million people at the brink of starvation. Forty-four percent of the western province population is in a “crisis phase,” meaning they are suffering from constant hunger and malnutrition, which in turn leads to economic uncertainty, illness, and higher mortality rates. The 2019 drought left crops unable to grow, which led to influxes in market prices, thus affecting people outside of the drought-hit regions. In November of 2019, the average price of maize was 90 percent higher than it was in 2018. Farmers were also unable to grow food for their livestock, which led to a shortage of meat.

In times of hunger, children are often affected the most, as their bodies need consistently nutritious food in high quantities in order to grow. The World Food Programme (WFP) reports that more than 50 percent of Zambian children aged five or younger have an iron deficiency, and 35 percent of children aged five or younger are stunted due to malnutrition. The United Nations also warns against “hidden hunger,” which occurs when a child eats a sufficient number of meals each day, but the meals lack the necessary nutrients and vitamins. As a result of the economic uncertainty and strain caused by nation-wide hunger, schools in Zambia have reported an increase in dropout rates, especially among girls.

In 2006, the Zambian Government agreed to invest in the Maize Meal Fortification Programme, which puts vitamin A, iron and other nutrients into maize, one of Zambia’s food staples. With the help of multiple national food organizations, the government invested the equivalent of $2.4 million into fortifying maize with necessary nutrients. The Maize Meal Fortification Programme helps combat the “hidden hunger” that many Zambian children face.

Data shows that fortifying foods with iron, A and B vitamins, folic acid and zinc “make a big difference to health and that deaths and illnesses, especially among children under five years and women in reproductive age, would significantly be reduced,” said the Zambia Minister of Health Honor S.T. Masebo.

In the past decade, the WFP has also worked with the Zambian government to support small, local farms. Maize is the country’s staple food, but it is sensitive to weather conditions. The WFP advocates for farmers to grow crops that can survive droughts and helps farmers with savings and credits to buy seeds and equipment. The organization also provides education about the best times to plant certain crops and how to harvest them efficiently, and helps smallholder farms evolve into business farms.

While malnutrition and hunger still affect many people living in Zambia, positive changes are being made. The government, along with other organizations, is working to help improve the nutrients in maize, and the WFP is working to help farmers protect their crops from varying weather conditions. This will help children facing hidden hunger while also preventing hunger caused by the loss of crops during the drought.