Tag Archive for: Hunger in Micronesia 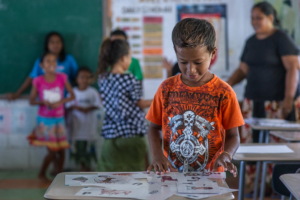 All too often, poverty’s defining factor is income. However, other factors such as access to healthcare, public transportation and education all impact poverty as well. Micronesia’s well-deserved reputation as a paradise wrongly implies that poverty and hunger aren’t an issue. The islanders face a complex grouping of problems affecting food availability and agriculture despite the picturesque locale. Micronesia is comprised of 607 islands in the Northwestern Pacific. The country is represented in four states: Yap, Chuuk, Pohnpei and Kosrae. It is home to about 112,000 citizens with a median household income of $7,336 as of 2019, primarily earned through the agriculture, fishing and tourism industries. This article will highlight the issue of hunger in Micronesia and list three potential solutions.

The issue of hunger in Micronesia has varying causation through the states. Although, some of the primary culprits throughout the country are climate change, a lack of affordable food and rapid urbanization. The effects of climate change in Micronesia is increasingly apparent; the resulting damage effects produce and agricultural land at an alarming rate. Wells in developing areas can become unusable once saturated with seawater, limiting potable water sources for drinking and cooking. Naturally abundant crops like breadfruit and taro suffer from rising sea levels too, with the intrusion of saltwater into their root systems limiting crop-yields or rendering them inedible. In the case of taro root, it takes between two and three years for the plant to be harvestable, so the damage is often long-lasting.

Rising sea levels have also forced residents to relocate or become further removed from services like emergency food supplies. Additionally, the geographical layout of the islands leads to heavy rainfall throughout the year and increases the number of typhoons, exacerbating coastal erosion. Unfortunately, many Micronesians live in these sinking coastal areas.

The loss of land and local produce has led to a search for non-agricultural jobs, leading to rapid urbanization in the country. This change has traditionally meant increased dependence on imported food as opposed to local crops, typically exported to the U.S., Japan and Guam. While convenient, these imported foods lack nutritional density, and often lead to health problems, increasing the rates of obesity in Micronesia. Today, as much as 70% of the daily diet in Micronesia can come from imported sources.

Solutions to Hunger in Micronesia

Unfortunately, issues like climate change seem to be here to stay. But, there are solutions to hunger and poverty in Micronesia. Below are three potential solutions:

Identifying the issues and creating potential solutions is just the first step to ending poverty in Micronesia. Hopefully, Micronesia will choose to implement its plans and to invest in its future citizens. However, it will take foreign aid and the work of NGOs to fully tackle the problem of hunger in Micronesia.