Tag Archive for: Hunger in Azerbaijan 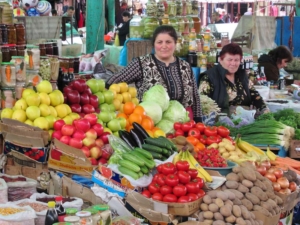 Hunger in Azerbaijan has been widespread for the last three decades. The country is located to the south of Russia, to the west of the Caspian Sea and to the east of Armenia. Saida Verdiyeva, a mother of two, lives in Toganali, a village in northwest Azerbaijan. Verdiyeva fears that social-distancing measures, which her government established in response to COVID-19, will make it impossible for her to feed herself and her two children.

In October 1991, two months before the collapse of the Soviet Union, Azerbaijan declared its independence from the soviet block. The subsequent years of economic turmoil in her country led to widespread poverty and hunger in Azerbaijan.

Degeneration of Azerbaijan’s Economy Between 1991-1994

By 1995, Azerbaijan had endured a critical socio-economic crisis. According to the IMF, Azerbaijan’s Gross Domestic Product, industrial production, agricultural production, real average monthly wages, household consumption- virtually every meaningful factor of the country’s economy- plummeted between 1991 and 1994. It wasn’t until the end of 1994 that the government took some control over the economic crisis. In 1995, state-led programs were successful in addressing issues of economic degeneration and adverse living standards.

In 1995, after four years of economic crisis, Azerbaijan had a Global Hunger Index score of 28.30. Consistent with the relatively steady economic improvement between 1995 and 2000, Azerbaijan’s GHI score reached a value of 14.60 in 1996. It remained close to this benchmark in 1997. However, between 1997 and 2000, Azerbaijan’s GHI score increased from 14.89 to 27.50. For about two years, the numbers show a direct relationship between Azerbaijan’s GHI score and its economy. However, the macroeconomic solutions implemented by the government at the time were deficient in addressing the specific needs of certain regions and populations. In all likelihood, Verdiyeva was among those Azerbaijani whose local problems were not fixed.

Hunger and Poverty in Toganali

Hunger in Azerbaijan, as elsewhere, is linked to poverty, and poverty is often a result of unemployment. Before COVID-19, Verdiyeva worked as a dishwasher for large events. Due to social-distancing measures, there have not been many large events in or around Toganali. As a result, Verdiyeva has struggled to find work. Many countries around the world are scrambling to prevent hunger crises caused by the global coronavirus pandemic. However, nations that had already implemented relevant social policies and established the necessary bureaucratic infrastructure to handle hunger crises will now have a more nuanced ability to cope.

The Agenda for Sustainable Development in Azerbaijan

In 2015, all United Nations Member States agreed to pursue domestic policies in line with the UN’s Sustainable Development Goals. The priorities of the SDGs are to end global poverty and ensure environmental protection. In addition, the SDGs aim to create conditions whereby all people can enjoy peace and prosperity. These objectives are to be fulfilled by 2030. Among 166 other countries, Azerbaijan ranked 54th in its commitment to the SDGs. Much of Azerbaijan’s success in this regard is owed to the diligence in creating bureaucratic mechanisms to track vulnerable populations and organize data on age, gender and location of such groups. The SDGs’ principle of “leaving no one behind” involves a preliminary method of accumulating a body of information about vulnerable demographic groups. The implication is that being seen is a prerequisite for being helped. Verdiyeva and her two children are among those Azerbaijani who will benefit from their country’s commitment to the SDGs and its principle of “leaving no one behind.” In 2013, only 24% of preschool-aged children were enrolled in preschool education in Azerbaijan. By 2017, 75% of preschool-aged children were enrolled in a school where they have access to daily meals. Likewise, the hourly earnings of female employees and unemployment rates improved from 2010 to 2017. Comprehensive domestic policies, like the SDGs, are institutional methods of ending hunger in Azerbaijan. COVID-19 is an obstacle to reaching this end goal. However, the Azerbaijani government made valiant efforts, especially from 2015 to 2020, to ensure healthier living conditions for its vulnerable populations through the next decade. – Taylor Pangman Photo: Flickr