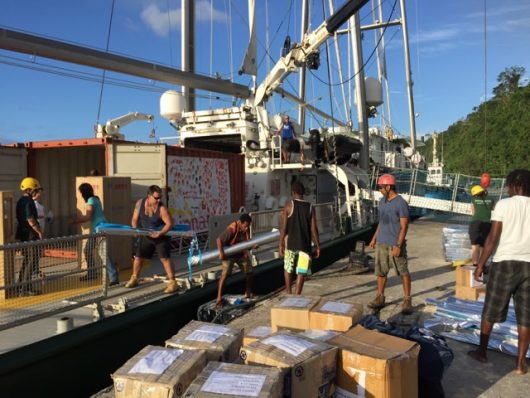 Vanuatu is an island nation located in the South Pacific, west of Fiji. One of the major problems Vanuatu faces is cyclone storms, which are tropical storms that create a heavy circulation of strong winds, thunderstorms and severe rain. Following such disasters, humanitarian aid to Vanuatu is critical.

Recently, in 2015, Vanuatu suffered one of the worst cyclones yet. Cyclone Pam was the second most intense cyclone in the South Pacific Ocean and one of the worst natural disasters in Vanuatu to date. During Cyclone Pam, winds exceeded 185 miles per hour, destroying 90 percent of the country’s infrastructure. As a result of this disaster, the success of humanitarian aid to Vanuatu was essential during this time and thereafter.

Following the natural disaster, helicopters carrying aid was one success of humanitarian aid to Vanuatu. Having most of the infrastructure completely destroyed, helicopters were the best way to reach the communities in need. The Airbus Helicopters Foundation worked with the French Foreign Affairs Ministry Crisis Center. Together, they distributed humanitarian aid to people affected by the cyclone, including medical supplies and food.

The Airbus Helicopters Foundation also worked with numerous stakeholders to send helicopters to humanitarian workers. These workers would then get the supplies to the communities in the most desperate areas. They partnered with Garden City Helicopters from New Zealand in order to provide even more helicopter assistance to Vanuatu people in need.

One of the main humanitarian aid contributors during this disaster was Vanuatu’s neighbor, Australia. The Australian government committed $35 million after Cyclone Pam, between 2015 and 2018. The aid focuses on long-term recovery support and is delivered through the assistance of the Reserve Bank of Vanuatu. The recovery plans include:

These improvements will be focused on Shefa and Tafea, the provinces where nearly 90 percent of damage and destruction occurred after Cyclone Pam.

Israel also helped the success of humanitarian aid to Vanuatu by sending food to feed 2,000 of the Island’s residents for the length of one month after Cyclone Pam hit. Food scarcity became a problem after the disaster as approximately 70 percent of Vanuatu’s crops were destroyed.

The food was a porridge in powder which was high in nutrients and helped people retain a healthy diet during the crisis. Israel’s Agency for International Development Cooperation in the Foreign Ministry sent food aid, which was then delivered locally by the Israel Forum for International Humanitarian Aid.

In addition to the food aid, volunteers from Israel stayed behind to help the local population. They renovated water systems and reestablished medical and mental health systems for the community.

The success of humanitarian aid to Vanuatu is just one of many examples where aid has helped thousands of people recover after a crisis occurs.