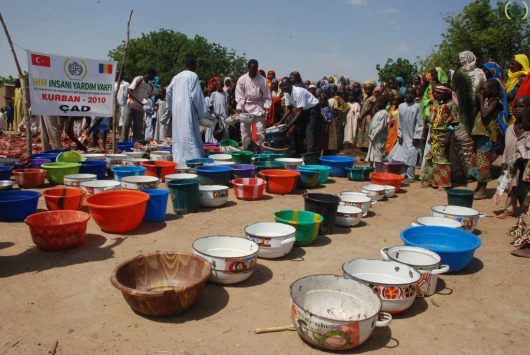 The sub-Saharan African nation of Chad is one of the poorest countries in the world. Nearly one-half of its 13 million inhabitants live in poverty, with that number reaching 87 percent in rural areas. Chad ranks 184 out of 188 on the Human Development Index, a measure of achievement in three essential elements of human development: life expectancy, education and standard of living. Given these statistics, humanitarian aid to Chad is imperative.

Chad faces the overlapping crises of food insecurity, malnutrition, human displacement, epidemics, climate change, drought and chronic poverty. It has one of the world’s highest rates of maternal mortality, high infant mortality and a life expectancy of under 50 years. Over one-third of the population is undernourished, and less than one-third is literate.

Approximately 4.7 million citizens require humanitarian assistance, including 900,000 in need of emergency food. Conflict in neighboring countries has also led to an influx of 409,000 refugees into Chad, which has an extremely limited capacity to shelter them.

Thankfully, a number of international organizations are providing humanitarian aid to Chad.

The European Commission (EC) is one of the main donors. It focuses largely on food assistance, malnutrition, epidemics, internally displaced people and refugees. The EC has helped 750,000 people through food programs. It has also provided healthcare and education for internally displaced people, protection for those fleeing Boko Haram violence and agricultural programs for refugees.

Solidarites International assists farmers and herders, whose livelihoods have been in decline for several years. It provides them with resource management to combat lack of income and malnutrition, and risk reduction activities to better handle natural disasters.

In 2018, the United Nations Children’s Fund (UNICEF) plans to provide treatment for 169,200 young children suffering from severe acute malnutrition, measles vaccinations for 147,000 children and clean water for 182,500 conflict-affected people. It estimates that there are 4.4 million people and 2.5 million children in urgent need. Of these, UNICEF hopes to reach 763,800 and 502,650 respectively.

Its multi-faceted humanitarian strategy encompasses a broad range of solutions. It includes children’s rights, psychosocial support for refugees, care for unaccompanied children, family reunification services and mine-risk education. To meet the need, UNICEF is requesting $54 million in funding for 2018.

Humanitarian aid to Chad is essential yet underfunded. The international community bears the responsibility of intervening on behalf of the Chadian people. While many organizations are doing amazing work on the ground in Chad, more help is urgently needed to combat the complex crises facing the nation.