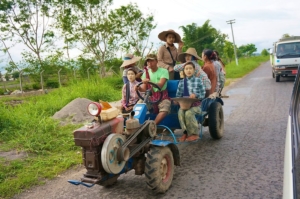 Human Trafficking In Myanmar and surrounding countries such as Thailand, China and Laos have historically struggled to contain trafficking throughout the region of Southeast Asia. This crisis has escalated since the Tatmadaw (Myanmar’s Army) overthrew the democratically elected members of the National League for Democracy party in early February 2021. As of 2022, the United Nations estimates there are 1.2 million refugees and asylum seekers in Myanmar, nearly half of whom are children.

As the world watched in disbelief as the fabric of democracy fell apart within Myanmar, many overlooked an already serious problem that had plagued the country – human trafficking.

Human trafficking in Myanmar has always been a prevalent issue. However, the recent conflict has created thousands of desperate refugees giving human traffickers an abundant amount of targets. In fact, the United Nations estimates that there are some 440,000 internally displaced people since the coup took place.

According to the 2021 Trafficking in Persons Report by the U.S. Department of State, “The international monitor-verified use of children in labor and support roles by certain military battalions increased in conflict zones.” The report indicates that the coup combined with the COVID-19 pandemic has led to reporting far fewer trafficking cases making it difficult to estimate exact figures.

Globally human trafficking has become a booming business for criminals. Some estimates predict it has become one of the world’s most profitable organized crimes, bringing in more than $150 billion globally a year. According to the Walk Free Foundation’s Global Slavery Index, two-thirds of its victims are in East Asia and the Pacific.

Human traffickers often deceive victims with the promises of high-paying jobs in surrounding countries in fields such as construction, agriculture and hospitality. Approximately 600,000 immigrants from Myanmar are legally registered to work in Thailand. However, many more are there working illegally in underpaid inhumane working conditions in industries such as fishing, factories, agriculture and sex work. Reports estimate that “out of 1 million illegal immigrants in Thailand, 75% are from Myanmar.”

Myanmar has been a hotbed for human trafficking for years due to political instability, natural disasters and internal ethnic infighting leading to a massive lack of opportunity for its populace. Since the coup took place, the number of individuals at risk of trafficking has skyrocketed. Despite this, there has been a notable decline in the population reporting trafficking cases due to the distrust between the populace and government forces.

Thailand is not the only country for the victims. Traffickers move many young women out of Myanmar and bring them to China where there is a large market for young women for the purposes of birth trafficking. Many of these women are from the Kachin State, a predominantly Muslim and Christian minority located in Myanmar’s northernmost regions bordering China. The practice of smuggling women to another country for the purpose of marriage and childbearing has become more common as experts point out how China’s “one-child policy” preference towards boys created a massive gender ratio gap resulting in millions of unmarried young men.

According to a report from John Hopkins Bloomberg School of Public Health that surveyed four northern districts in Myanmar, there are more than 7,400 victims of forced marriage in China. “Victims of forced marriage suffer a range of rights violations and exposure to physical and psychological risks,” said Courtland Robinson, Ph.D., associate professor in the Department of International Health at the Bloomberg School. The true number of Myanmarese women trafficked into China is likely far higher due to only four districts (out of 74) examined in the study as well as this study dating back to 2017 and 2018, three years prior to the military coup.

When examining the root of human trafficking in Myanmar, the two largest causes would be poverty and political instability. The recent conflict has only exacerbated the flood of refugees making it easier for traffickers to take advantage of desperate people. Military control over Myanmar’s government has resulted in the loss of practically all trust between the government and the populace, creating a need for NGOs and other nonprofits to step in and provide aid.

The International Rescue Committee (IRC) is an NGO that has been operating in Myanmar since 2008 and continues to provide aid such as health care, water and sanitation services, career training and support for community development projects.

The IRC primarily operates in Myanmar’s most at-risk and remote regions such as Rakhine, Chin and Shan states. Some strategies the IRC uses to bring stability to the region include; teaching farmers modern agricultural techniques and technologies, assisting communities in the development of projects such as schools and health care centers and operating women and girls’ centers to support survivors of trafficking violence. The IRC also provides aid to thousands of refugees located in nine camps across the Thai border. The International Rescue Committee’s goal in Myanmar is to eventually stabilize the region through implementing infrastructure assistance.

With no assistance from the government and minimal response from members of the international community, the importance of NGOs and nonprofits operating in Myanmar is huge. As regional instability increases and the armed conflict continues, more people in Myanmar become displaced and are at risk of becoming trafficking victims every day. However, with the support of NGOs and nonprofits that are taking proactive and reactive measures to stabilize Myanmar, human trafficking in Myanmar can reduce.