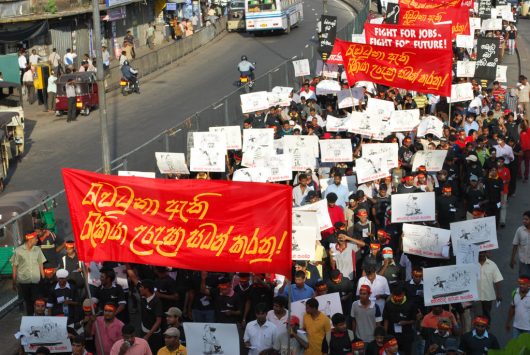 Ridden with human rights violations, Sri Lanka is an example of the abuses that persist around the world. A 27-year civil war contributed to the lack of human rights in Sri Lanka. Although the war has ended, these violations have not. A new government instilled hope for many, but sadly a United Nations envoy discovered that human rights are still a pressing issue for the island country.

The conclusion of the civil war saw the massacre of an estimated 40,000 Tamils, an ethnic group that was seeking independence. The U.N. has made revelations in recent years that human rights were violated and ignored by both sides during the war.

The civil war saw fighting between government forces and the ethnic minority group the Tamils. The 27-year war caused the deaths of 100,000 people and created the foundation for unstable human rights in the country. The war ended almost 10 years ago, but trials and accusations are still of concern to the U.N., Sri Lanka’s government and the Tamils.

Some accusations include withholding aid by the government and forced recruitment by the rebels. These are both considered human rights abuses and reaffirm that there have been consistent abuses of human rights in the country.

Nearly 10 years after the end of an atrocious war, Sri Lanka has begun to realize the damage done and has instituted reforms and changes to better the future. The newly elected government of 2015 has been praised by organizations such as Human Rights Watch for ensuring that the police, judiciary system and human rights commissions are all independent sectors. These reforms signal progress, but the country continues to be plagued with human rights abuses.

Women are universally at a disadvantage when it comes to human rights, and Sri Lanka is no exception. The U.N. Commissioner on human rights reported that barriers such as various languages, narrow knowledge on social norms around the world and a stigma that is associated with reporting sexual crimes have made Sri Lanka a dangerous place for women.

Although there is still work to be done, human rights in Sri Lanka could be headed for a prosperous future. With a progressive government in place, Sri Lanka is in a place to move forward. The civil war brought atrocities and decades of terror, but hope is the best choice for Sri Lanka.