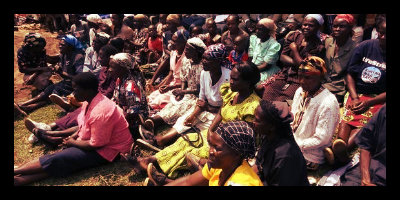 Amnesty International and Shinyalu Central and West Self-help Group have been working together to organize a Human Rights Education micro-project to help people in Africa who don’t realize that they have more rights than they think, such as Alice.

Alice and her two children almost lost their home when her husband died and his family attempted to take away all of the property he had owned and evict them from their house. But Alice went to a local meeting that discussed human rights, and she had learned that under Kenyan law, she had a right to take back some of that property because she inherited it. She took proper actions and ultimately won back the property she had thought she lost.

There are too many cases of people who don’t realize all of the rights they have, and therefore they accept what’s given to them because they haven’t been educated properly about what they can do. The Human Rights Education project has trained people in various countries, including Mali, Benin, Burkina Faso, Senegal, Togo, Sierra Leone, Ghana, Côte d’Ivoire, Kenya and Uganda, to teach citizens about the law and give them confidence to come forward with their case.

An interesting aspect of the project is that each community gets to decide what topics should be covered based on the problems of that particular area. The workshops are then specially designed to reflect those issues, and the training consists of using art, music, theater, and other participatory methods to get people involved in creating their own solutions and learning about their rights.

One topic that has been focused on in particular is women’s rights and ending abusive behavior. Along with educating the citizens about the problems, the teachers of the workshop also discuss the issue with the community’s leaders to try to find a mutual solution to end the abuse.