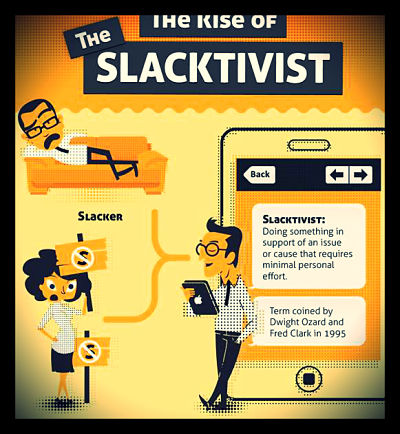 The cynicism implied in the word slacktivism, which describes a lazy form of activism requiring little commitment of the participant and having almost no effect on policy and social issues, has been pushed to the forefront of public discourse lately. A recent phenomenon, this social-media led, tech-savy means of expressing one’s support for causes such as gay rights or ending modern slavery has been felt through the relatively safe confines of Facebook, Twitter, and university assembly quads. But does the slacktivist form of activism work better than the more traditional methods involving protests, writing congressional leaders, and fundraising? Yes and no, as the following describes three ways that slacktivism promotes social change.

1. It raises awareness – One of the more obvious ways that slacktivism promotes social change is through its exposure to social issues to huge audiences that were once limited by geographic location and means of communication. For those Facebook and Twitter users that have vast amounts of friends and followers, the switching of one’s profile picture to a red equal sign, for example, will no doubt generate questions by others who are curious as to why so many of their friends are changing their profiles on a given day. Through the vehicle of social media, a single individual is able to reach huge numbers of people with simply the click of a mouse and can raise awareness of a social issue almost instantaneously.

2. It allows everyone to participate – Unlike the traditional forms of activism that require a certain amount of interpersonal skills and economic commitments, slacktivism promotes social change by allowing everyone to participate in the movement. The current economic situation non-withstanding; most university students eager to participate have – at best – meager financial resources available to help fund an organization. By limiting the barriers of entry and participation in causes committed to social change, everyone who simply marks their hand with a red x feels that they are helping to fight slavery worldwide.

3. It leads to high-risk activism – Street protests, donor fundraising, and political volunteerism referred to as “high-risk” forms of activism are still instrumental tools of effecting social change. However, for those individuals who have had little to no experience in the traditional forms of activism, slacktivism helps people take the first steps towards larger civic engagement and global awareness. Individuals changing their profile picture on Facebook today may be serving as a board member for multi-national non-profits tomorrow, as slacktivism promotes social change in its ability to allow everyone to get their feet wet as a social media activist. And by combining the huge influence of social media along with good old fashioned congressional letter writing and fundraising, The Borgen Project has positioned itself to utilize the best of both worlds.